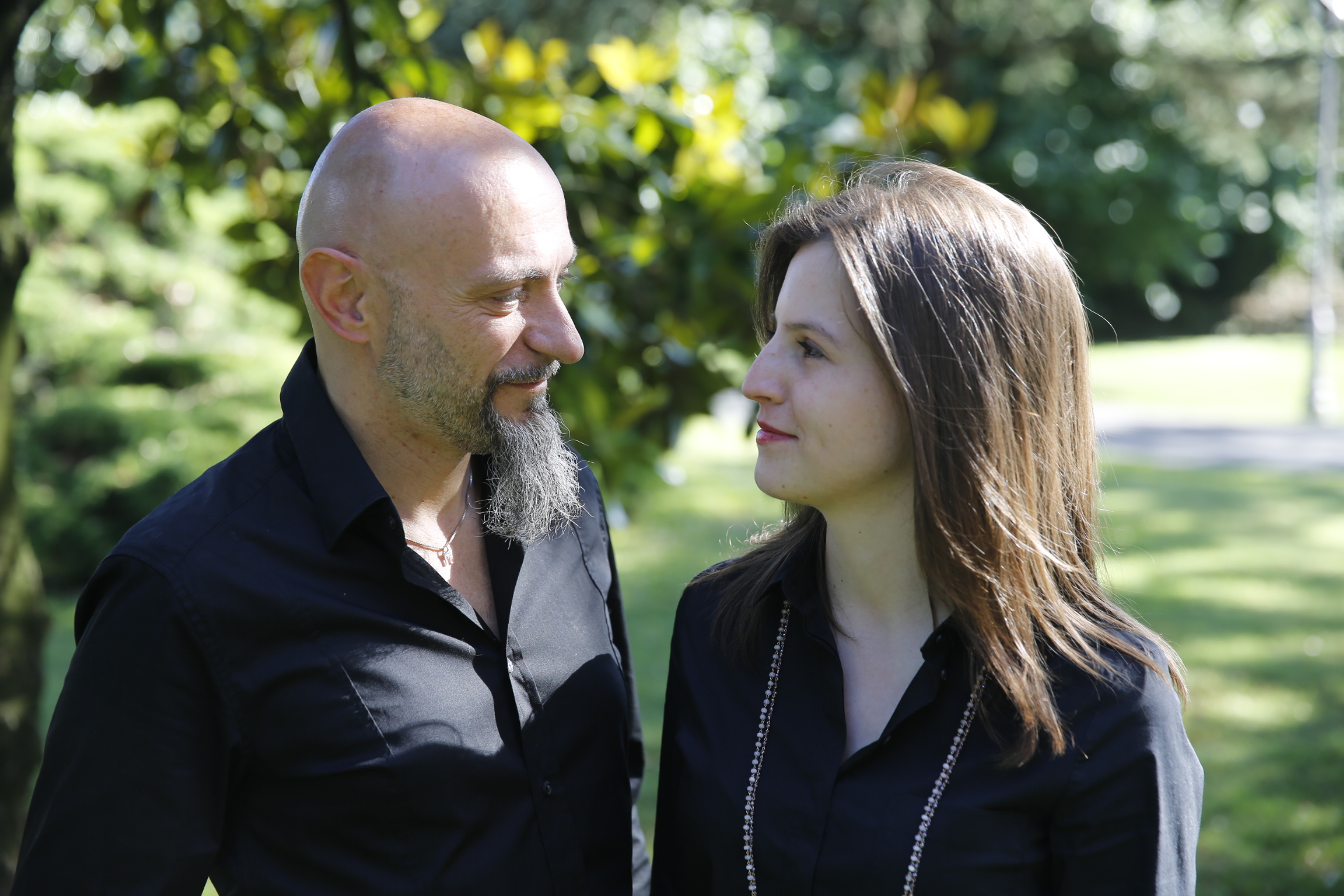 "Amongst the many projects Greg Lake and I planned for Manticore was the re-arranging of his favourite songs in a black and white, contemporary way. A sort of back to the bone, vocals and guitar setting, as simple as that. I remember Greg became an advocate of the new 'less is more' concept and he often reminded us that 'simplicity is the ultimate sophistication'. As we went further into the project, we soon discovered that an acoustic guitar could be fine for some tunes, but not suitable for others; so Greg decided we should go for piano and vocals and asked me to look for a talented piano player. I knew Max Repetti who I considered to be the perfect pianist for Greg. Apart from the fact that he had the entire ELP songbook in his repertoire, he is a very able musician. The audition lasted just a few minutes in a countryside restaurant on an upright piano which had seen better days, slightly out of tune, where Repetti dared to propose a medley of The Stones Of Years, from Tarkus, and Take a Pebble. Greg was so delighted that he immediately asked Max to arrange for him a list of tunes he intended to put on the album that we called Moonchild, after one of our favourite early songs. Sadly, in early 2014 Greg called me with the very worst news. Shortly after that, he decided to ask his young friend and talented singer and musician Annie Barbazza to take his place and carry on his legacy with this album. He patiently trained Annie using all the available technology to keep him up to date with our progress, while continuing to work with Max Repetti and me on the arrangements and production. We all spoke on Skype several times a week to ensure this project matched his standard of perfectionism and musical integrity. When Greg was awarded with an honorary degree for lyrics and music composition by Conservatorio Nicolini in January 2016, he was already too ill to attend the ceremony in person. I decided to surprise him by having Annie and Max perform his music on his behalf in front of the dignitaries. Greg was attending via Skype and you may listen to his encouraging comments on Greg Lake’s Official Channel on Youtube. He was so happy with the results that he pushed even harder for Annie to improve her skills as a singer. Annie Barbazza and Max Repetti performed Moonchild again at a sold out concert for Greg’s last birthday on November 10, 2016. As Greg wanted, we will keep the flame alive by playing his music. So this is for you, Grande Gregorio wherever you are. May your music resound forever in our hearts." (Max Marchini)
That of Max Repetti and Annie Barbazza is not a simple tribute to Greg Lake, the project was born from an idea of Lake himself: to propose in new arrangements in black and white, minimalist, for piano and voice the best of his career. Unfortunately, the terrible illness that struck him prevented him from completing the work, which he wanted to entrust to Annie: his friend and collaborator, as well as Max Repetti, pianist of extraordinary talent and arranger of this tribute. Lake spent the last three years of his life in daily contact with Annie, they saw each other many times and declared that he had placed his artistic legacy in her. Just as a string quartet shows the talent of a composer better than a symphony, these minimal and intimate versions of Lake's pieces do justice to one of the greatest talents in the history of British music. Piano and voice at the highest levels for a powerful and refined show that crosses the best pages of King Crimson, Emerson, Lake & Palmer and the solo career of Greg Lake. A sort of "official tribute" that debuted at the Conservatory of Piacenza on the occasion of the awarding to Greg Lake of the first Honris degree awarded by a conservatory to a rock star. A memorable show!

Max Repetti. Born in 1970 in Piacenza, Max Repetti is a pianist, keyboardist, composer and arranger. After graduating in piano at the "Giuseppe Nicolini" Conservatory with Maestro Midori Kasahara, he moved to Paris where he continued his musical training studying Jazz at the C.I.M. Ecole de jazz de Paris. In 1997 he went on tour with Alberto Garbelli in a tribute to the career of Charles Aznavour, performing in the most important French theaters. From 2000 until 2004 he moved to Rouen (Normandy) where he taught piano, theory and solfeggio and music history. Back in Italy, in 2004, he began a series of important artistic collaborations both at an educational and concert level, including the foundation, in collaboration with Silvia Sesenna, of Artemusica, a school of music and arts in Piacenza. In addition to being the Director, at Artemusica Max he teaches piano, keyboards and ensemble music. He resumed his training and in 2011 he obtained a two-year diploma in Sound Technology at the Giuseppe Verdi Conservatory in Milan. Among the most important concert collaborations of this period: pianist of the Placentia Gospel Choir, keyboardist of the Italian Gospel Choir (Italian National Gospel) and the singer Melody Castellari, with whom he presents the album "Ci sarà da correre" in Italian theaters. He was keyboardist of the band of Spanish singer-actor Sergio Múñiz and from 2013 to 2016 he collaborated as an arranger with English singer Greg Lake, leader of King Crimson and Emerson, Lake & Palmer. He arranged for the label Level49 the song "In my dream" by Jean Diarra and collaborated with the singer Annie Barbazza as pianist and arranger for the creation of the duo Moonchild. From this artistic project comes the album-tribute to the career of Greg Lake "Moonchild", produced by Greg Lake and Max Marchini for the label Manticore Italy. He also collaborated as an arranger for the concert of singer Eugenio Finardi at the Teatro Municipale in Piacenza. In 2021 he collaborates as a keyboardist for the recording project "Ambigram" for Manticore Italy. Author of the music of the songs "Siamo pagine" and "Oasi" by Martina Zoppi. His first piano album with original compositions "Pictures of Life" was released in 2016 and was presented in Brazil at the Teatro Josè de Alencar in Fortaleza and at the Auditorium Fondazione Piacenza e Vigevano in Piacenza. In 2021 he released his second instrumental album for piano with original compositions entitled "Talk" produced by Multiforce Publishing.

Annie Barbazza is the rising star of the international avant / prog scene. She began her career at a very young age as a drummer in a progressive band while she studied piano at the Nicolini Conservatory in Piacenza. Her talent is accidentally discovered by Greg Lake (King Crimson, Emerson Lake & Palmer) who encourages her to deepen her vocal and compositional research and wants her on stage, just eighteen, alongside her together with Italian pro stars like Aldo Tagliapietra and Bernardo Lanzetti. Lake himself invents a show for her, Annie's Playlist, where the young multi-instrumentalist explores the classics of music that have played an important role in her artistic training: from the Beatles to Nick Drake, from King Crimson to the Residents through Brian Eno and Claudio Rocchi. The attendance of musicians / friends such as Lino Capra Vaccina, Keith Tippett, Fred Frith and Paolo Tofani 'diverted' her towards a much less conventional form of song. Such talent certainly does not go unnoticed and requests for collaboration begin: Eugenio Finardi often wants her live by his side and Annie finds herself opening concerts by Ian Paice, Peter Hammill, Strawbs and many others, while artists like Robyn Hitchock, Osanna, Giorgio Fico Piazza, Aldo Tagliapietra, John Greaves, Area and many others invite her to play live together. Just Paolo Tofani of Area invites her to sing Gioia e Revolution in their farewell concert. Greg Lake conceives the Moonchild project and produces the record for the historic Emerson Lake & Palmer label, Manticore Records. It is a minimal and contemporary reinterpretation of the historical and iconic pieces of ELP and King Crimson, arranged for piano and voice by Max Repetti, who performs on the piano. The record becomes an international success both from critics and audiences. John Greaves, the legendary founder of Henry Cow, wants Annie as the lead voice in Folly Bololey, a project where Craig Fortnam's North Sea Radio Orchestra revisits Robert Wyatt's legendary Rock Bottom under the benevolent aegis of the illustrious author. The work becomes one of the most important albums of 2019, becoming album of the year for many specialized magazines (Mojo and the influential The Wire). The ensemble closed the Rock In Opposition Festival in Lyon in May of the same year as headliners, triumphing a few months later in the live broadcast on Radio France in December of the same year. In 2020 he released his first solo album Vive which receives 5-star reviews around the world, while the authoritative English magazine Prog Magazine dedicates a large space to it calling it the revelation of the year: the King Crimson biographer, Sid Smith, compares the 'work in Lorca by Tim Buckley. A flood of authoritative critics including Ernesto Assante, Federico Guglielmi, Riccardo Bertoncelli and Gino Dal Soler write passionate reviews, and newspapers from La Repubblica to Libertà and La Stampa give space to the work, writing flattering pieces. Blow Up magazine awards it as the best record of the year. The disc is attended by musicians of the caliber of Daniel Lanois, Fred Frith, John Greaves, Greg Lake, Paul Roland, Lino Capra Vaccina, Paolo Tofani, Olivier Mellano, Michael Tanner and others. Today Annie is engaged on three different fronts, bringing her many projects to her lives: Vive sees Annie alone alternating with guitars and piano offering the music of her wonderful album along with some noble covers. John Greaves & Annie Barbazza duo: The Poet's Game, a refined show that has been successful in the trendiest theaters from the Gare du Jazz in Paris to the legendary Café Oto in London. Repertoire of the legendary Welsh musician and songs by Annie with particular attention to the musical transcriptions of Joyce, Thomas, Verlaine etc. Moonchild: Annie in duo with the pianist Max Repetti proposes the show produced by Greg Lake in which the songs by Emerson, Lake & Palmer and King Crimson are revisited in a contemporary key.