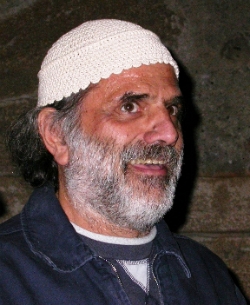 Franco was born in Gioiosa Jonica, in the province of Reggio Calabria, on October 11, 1949. In 1958 his family moved to Turin. He attended the Faculty of Economics and Commerce up to the 4th year, then, having obtained the exemption from the military service for redundancy, he devoted himself entirely to the profession (real estate expert for insurance) until 1999, the year in which he gained the right to pension.

CANTOVIVO
In 1973 he was one of the founders of the Turin group of popular music Cantovivo in which he played until 1983, participating in the publication of two audio cassettes and three LPs (one double and one Montreux Jazz Festival prize as the best European folk record for the year 1982). With the group he performs over a thousand concerts in Italy and Europe.

THE CENTRO CULTURA POPOLARE
In 1983 he founded the CENTRO CULTURA POPOLARE in Turin, together with singer-songwriter, musicologist and journalist Michele Straniero. It is the first town to offer singing courses, dances and traditional instruments, characterized by the rigor and seriousness that distinguish all Franco's initiatives; their immediate success opens the door to collaboration with the Turin Municipality and Province and Piedmont Region which will become stable and profitable over the years. In 2001 the CENTRO CULTURA POPOLARE was named in memory of Michele Luciano Straniero, died the year before.

In 1984 Franco organizes the first edition of the June in Cascina folk festival, which inserts folk into the Turin Green Points and will come to celebrate ten editions.
On January 8, 1988 Franco registered the new monthly publication FolkNotes with the Turin Court, with editors Michele Straniero and Franco himself. The publication was distributed and sent to FolkClub members until 2010 and printed until 2015.

THE FOLKCLUB
On April 16, 1988 the concert activity of the FolkClub began, a live music listening room with around 130 seats, in Via Perrone 3 bis, in the center of Turin.

Also in 1988, thanks to an agreement with the Ministry of Culture of Trinidad & Tobago, in collaboration with I.L.O. and B.I.T. of Turin, creates the Caribbean Carnival Fiesta in the city with the participation of some of the most famous Caribbean artists. In the same year he launched the Folkutore competition, which led to the production of a double LP of unreleased tracks by the thirteen finalists (including Sergio Liberovici). The competition was repeated in 1989 with finals and prizes hosted by the Tenco Club in the Reduced Ariston Theatre in Sanremo.
Still in 1988 with Michele Straniero, Lucà founded the Italian Federation of Popular Music which, however, did not reach the desired adhesions between promoters and Italian artists in the sector.

THE C.R.E.L.
On March 19, 1992 Michele Straniero, Emilio Jona, Giovanni Beccaria and Franco Lucà founded the CENTRO ETNOGRAFICO LINGUISTICO  of the Piedmont Region (C.R.E.L.), a non-profit and legally recognized Cultural Association.
The C.R.E.L. immediately makes use of a prestigious Scientific Committee, composed of Franco Castelli, Cesare Bermani, Renato Monteleone, Adriana Lai, Fausto Amodei, Angelo Agazzani and the four founders. Over the years Piercarlo Grimaldi, Tullio Telmon, Amerigo Vigliermo, Anna Maria Morello, Alberto Lovatto and Giovanni De Luna will also join the Scientific Committee.
Statutory purpose of the C.R.E.L. was the collection, safeguarding, cataloging and study of sound and paper documents of an ethnographic-linguistic, ethnomusicological, anthropological, historical and social nature, as well as the organization of any activity or initiative aimed at promoting and disseminating popular culture in general and music specifically.
The C.R.E.L. it is among the first in Italy to equip itself with an audio-computerized rescue station, thanks to which magnetic tapes are processed and then transferred onto digital support. The C.R.E.L. it also produces some CDs, CD ROMs and books, and takes care of special sector conferences.
In the C.R.E.L. the private collections of Sergio Liberovici, Michele Straniero, Emilio Jona, from the Centro Cultura Popolare and other minor researchers converged immediately. The C.R.E.L. archive over the years it has been enriched by the donations of many important ethnomusical researchers (and not only), becoming in a short time one of the most important in Italy and in Europe for the quality, richness and quality of the materials it holds.
The main funds deposited and available were:
fund FRANCO LUCÀ
fund MICHELE STRANIERO
fund SERGIO LIBEROVICI
fund EMILIO JONA and SERGIO LIBEROVICI
fund FRANCO CASTELLI
fund ANTONIO ADRIANO
fund GUSTAVO BURATTI
fund GIAN LUIGI BECCARIA
fund DONATELLA CANE
fund DANIELE TRON
fund PIER PAOLO SANCIN
archive TEATRO STABILE of TURIN
archive REDUCI DI GUERRA MAGLIANO ALFIERI
archive ISTITUTO STORICO DELLA RESISTENZA TORINO
archive UNIONE CULTURALE FRANCO ANTONICELLI
copy of a large part of the sound archive MUSEUM OF ART AND POPULAR TRADITIONS in Rome.
In its maximum expansion (around 2009/2010), the CREL article archive consists of approximately 6.500 books, 3.000 magazines, 3.700 paper files, 11.600 CDs, 1.300 tape reels, 3.200 cassettes, 8.950 discs, 560 VHS, 1.100 DVD, 80 CD-ROM, 860 photos; all material whose consultation was free.

In June 1993 Lucà organizes the International Guitar Master in which, after 17 years of absence from Italy, an American folk legend participates: Pete Seeger. Between 1994 and 1997, original folk singing workshops were activated in Elementary schools; in nursing homes for the elderly those on songs from the 1940s and 1950s; in the Middle School and in Higher Institutes those on the songs of the Resistance.

PELLEROSSA
In 1994 the Associazione Pellerossa was born, with the idea of ​​conceiving and organizing the summer musical event of the City of Turin. This includes FolkClub, Hiroshima Mon Amour, Musica90 and the Grinzane Cavour Prize. The Presidency of Pellerossa is entrusted to Lucà and renewed for nine years. At the Pellerossa festival participate artists such as Bob Dylan, Joan Baez, Khaled, Sinead O'Connor, Jovannotti, Jamiroquai, Emir Kusturica, Goran Bregovic, Buena Vista Social Club, Miriam Makeba, Noà, Compay Segundo, Alan Stivell, Los Lobos, David Byrne, Madredeus, CSI, Africa Unite, Almamegretta, Mau Mau, Ivano Fossati, Paolo Conte, Mercedes Sosa and many others. The richness and quality of the artistic proposal, the caliber of the artists involved, the exceptional duration of the festival and the turnouts at the concerts (also thanks to the low ticket prices) are all factors that, overall, make without doubt Pellerossa one of the most important festivals on the European scene for several consecutive years.

Over the years Franco matured and amplified his artistic collaborations with other cities, with the University, with RAI, with the Book and Music Exhibitions, with the Teatro Regio. In 1998, within the Pellerossa festival, Lucà launched the GreenAge competition, aimed at young authors and emerging groups. The competition is supported by S.I.A.E. and in 2000 saw the participation of 108 artists from all over Italy. GreenAge continues until 2015 becoming the longest Italian festival aimed at emerging groups, annually involving more than 80 groups from Piedmont (and not only) in about forty live entertainment evenings.
Also in 1998, the European Network of Traditional Music and Dance was born in Perpignan (F), bringing together consolidated cultural entities from 15 European countries. Lucà is entrusted with the Vice-Presidency.

In 1999 a new C.R.E.L. project for the School, related to singing, dance and traditional instruments workshops, it's supported by the Piedmont Region. The outcome of 114 courses throughout the Piedmont area leads to the reconfirmation of the project for 2000 and to the sharing of the City of Turin.
In 2000, in collaboration with Association Ethnosuoni in Casale (Alessandria), the independent record label FolkClub Ethnosuoni was born, aimed at the productions of emerging artists ignored by the main record market and, within a decade, the label has in its catalog more of 30 titles.

THE TENCO PRIZE
In November 2000 Franco Lucà was awarded with the Tenco Prize for the Cultural Operator. The last Italian to be awarded before him was Virgilio Savona, from the Quartetto Cetra, in 1994.

MAISON MUSIQUE
In 2003, the City of Rivoli entrusted the former slaughterhouse and ice factory to the C.R.E.L: a 5.000 m2 structure in Art Nouveau style where, according to Franco Lucà's design, the C.R.E.L. created Maison Musique, the first music village in Italy, with an auditorium, recording room, traditiona instruments museum, musicarium, ethnomusicological documentation center, guesthouse, bar, restaurant. The center was inaugurated on May 28, 2004 and becomes the headquarters of the C.R.E.L. and the offices of the FolkClub.
Maison Musique quickly established itself as a cultural center of not only national importance, reaching to involve over 220,000 spectators in its musical activities in 10 years of activity.

THE TWENTIETH ANNIVERSARY
On 11 April 2008 Lucà organizes an extraordinary evening at the Teatro Regio in Turin celebrating the FolkClub's 20th anniversary: more than thirty internationally renowned artists alternate on the stage of the Regio, making the evening unforgettable and extraordinary, to the point of motivating Franco to the publication of a DVD that shows the concert in full (more than 3 consecutive hours).

The Twentieth Anniversary Concert will be the last major initiative organized by Franco to which he will attend: it goes off on June 15 of the same year, in the quiet of his home in Turin.