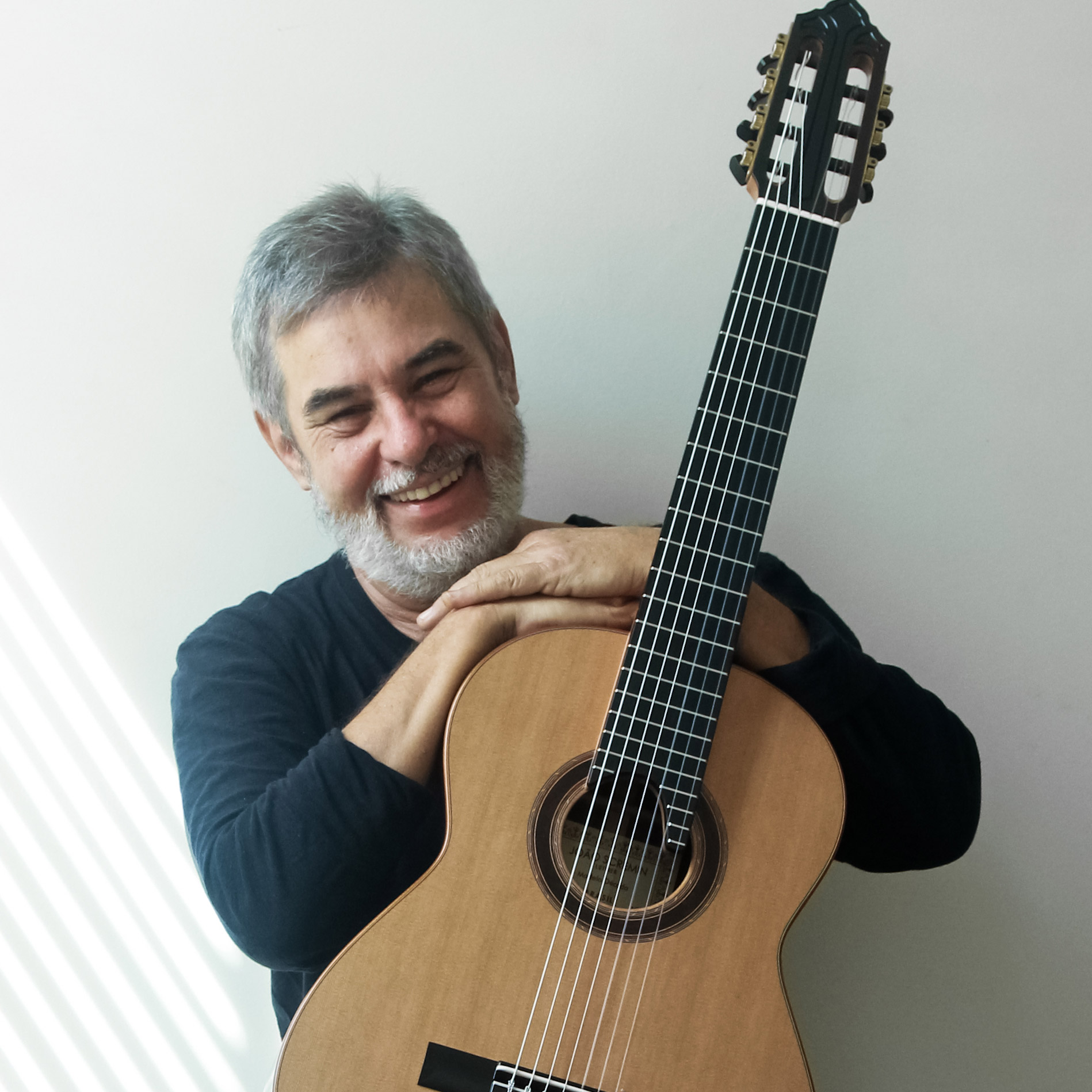 The second appointment of the thirteenth edition of RadioLondra sees the performance of an unusual line-up for this review: a duo. Certainly one of the most important Brazilian guitarists of all time and among the most illustrious and acclaimed acoustic guitarists in circulation, a dear long-time friend of the Club, joins one of the most requested drummers on the Italian scene, our speaker for 13 years. A partnership born 15 years ago during the recording of Marco's album "Stella del Mattino", in which Enzo was on drums. A close and intimate dialogue between two extraordinary artists, an apotheosis of lyricism and synchronism, which is dominated by South American sounds and rhythms in all their declinations.
Marco Pereira was born in Sao Paulo in Brazil and began studying classical guitar with the Uruguayan master Isaias Sávio, following lessons in music theory at the Conservatory of Music and Drama in his city. In France he obtained a master in classical guitar in performance at the Université Musicale Internationale in Paris and a master in Musicology at the Sorbonne University with his thesis on Heitor Villa-Lobos and his guitar work. In Paris, where he lives for five years, he is strongly influenced by jazz and Latin American music that characterizes his compositional work, in addition to the Brazilian styles that he already dominates. He performs with great success at the 9th Festival de Jazz de Paris, which allows him to perform in Germany, France, Switzerland, Denmark, Italy, Austria, Canada and the United States. In Spain, he wins two prizes in important international guitar competitions: Concurso Andrés Segóvia (Palma de Mallorca) and Concurso Francisco Tárrega (Valencia). Upon his return to Brazil, Marco settled in Brasilia after being invited by the University to set up courses in Classical Guitar and Functional Harmony. He recorded his first two albums for Som da Gente ("Violão Popular Brasileiro Contemporaneo" in 1985 and "Circulo das Cordas" in 1987), two discs that opened the doors of the Big Apple to him, where he performed in 1988. In 1989 he moved in Rio de Janeiro and participates in the Free Jazz Festival on four occasions: in a memorable performance with the Trio D'Alma in 1989; with his own work in 1991; with Wagner Tiso in 1992 and with Edu Lobo in 1996. He has recorded with many leading artists in the Brazilian music scene, such as Gal Costa, Tom Jobim, Edu Lobo, Gilberto Gil, Wagner Tiso, Daniela Mercury, Zizi Possi, Zélia Duncan, Cassia Eller, Rildo Hora, Paulinho da Viola, Milton Nascimento, Leila Pinheiro, Fátima Guedes, Nelson Goncalves and Roberto Carlos among others. Pereira received the important Sharp Award in two different editions: in 1993 as Best Arranger for Gal Costa's album "Gal" and in 1994 as Best Soloist and Best Album of the Year for "Bons Encontros" with pianist Cristovão Bastos. He is currently a professor in the Composition Department of the Federal University of Rio de Janeiro. His compositions have been published by the publisher Éditions Lemoine - Paris, by Guitar Solo Publications-San Francisco (USA), by Editora Musimed-Brasilia and Editora Garbolights-Rio de Janeiro and have been played and recorded by important guitarists from all over the world. In 1995, Marco released three albums: "Dança dos Quatro Ventos", "Elegia" for the Dutch label Channel Classics, and "Brasil Musical". In 1999 he released his first solo album "Valsas Brasileiras", with an exquisite repertoire of modern Brazilian popular waltzes. In 2001 "Luz das Cordas" was released, recorded with the great mandolinist Hamilton de Holanda (and presented with him at FolkClub in November 2003). In 2004 Marco recorded two different albums: "Original" with his own compositions for solo guitar, and "O samba da minha terra", with new arrangements and compositions for guitar, bass, drums and percussion. In 2006 he recorded an album with harmonica: “Afinidade”; in 2007 is his album with orchestra: “Camerístico”; also in 2007 he publishes his book + CD “Ritmos Brasileiros”. He also has two CDs released in Europe: "Stella del Mattino" from 2006 (which features Enzo Zirilli on drums) for the EGEA label, and "Essence". In 2010 he released a solo guitar album along with a book that contains all the arrangements and compositions transcribed in musical notation. He has also published a 7-string guitar method ('Sete Cordas - técnica e estilo'). In 2011 he publishes his 3-volume guitar method "Cadernos de Harmonia" and a CD with his work for guitar and orchestra. His composition "Lendas Amazônicas" for two guitars and orchestra is performed for the first time in November 2012 in Sao Paulo. In 2017, his "Concerto Calunga", for guitar and orchestra was premiered in Russia with Eduardo Isaac as a soloist. Marco has been missing from FolkClub since December 2008, the year in which he performed in a duo with the great clarinetist Gabriele Mirabassi.
Welcome back !!!
https://www.marcopereira.com.br/