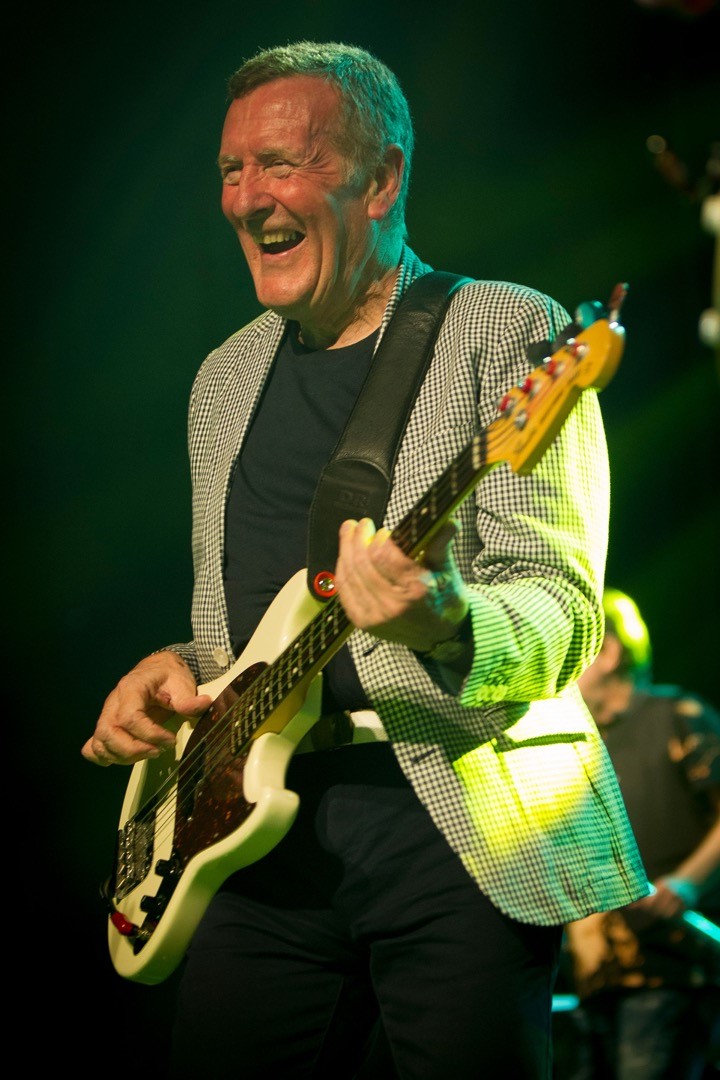 After being a member of Average White Band, a historic English funk and soul band from 1972 to 1982, Hamish Stuart worked with Aretha Franklin, Chaka Khan and David Sanborn. He wrote the 1986 hit "If Your Heart Isn't in It", played by Atlantic Starr, and numerous songs for Diana Ross, Smokey Robinson, Jeffrey Osborne and George Benson. In 1989 he joined Paul McCartney's band, dividing himself into guitarist and bassist roles. In the same year he played on McCartney's album "Flowers in the Dirt" and joined the singer on his world tours in 1989 and 1993. After collaborating with numerous artists, in 1999 he recorded his first solo album, "Sooner or Later", released by his record company Sulphuric Records. In addition to playing with his group, the Hamish Stuart Band, and with his guitarist friend Jim Mullen, Stuart also produced Gordon Haskell and Swedish singer-songwriter Meja. In 2006 and 2008 Stuart toured with Ringo Starr & His All-Star Band as bass player. He rejoins Ringo for the 2022 tour and is currently touring the world with the All Starr Band alongside musicians such as Steve Lukather (Toto), Edgar Winter and Colin Hay (Men at Work). Hamish will be accompanied by Italian hammondist Gianluca Di Ienno (the expected British organist Ross Stanley will not be able to take part in the tour due to serious health problems of his mother). At the drums there will be Enzo Zirilli, eclectic and renowned Turin jazz drummer already alongside Hamish in the past during his stay in London as well as collaborator of illustrious soloists such as Larry Nocella, Franco Cerri, Gianni Basso, Hal Stein, Benny Bailey, Flavio Boltro. In 1991 on tour with Gloria Gaynor, Zirilli recorded and toured with some of the most important musicians belonging to the areas of Jazz, World Music and Pop such as Dado Moroni, Bob Mintzer, Tom Harrell, Enrico Pieranunzi, Ares Tavolazzi, George Garzone, Peter Bernstein, Peter Washington, Ira Coleman, Rossana Casale, Antonio Faraò, Charlie Mariano, Ivan Segreto. On guitar and backing vocals Alex Gariazzo, historical guitarist of the Treves Blues Band since 1995 with whom he has over 1000 live concerts (opening act for Bruce Springsteen, Deep Purple, ZZ TOP, John Mayall, John Hammond, Eric Bibb and many others) and various radio and television participations. Composer and producer he occasionally collaborates as a live and studio session man with American artists such as Michael McDermott (Tenco Prize 2022), Jono Manson, Doug Seegers, Scarlet Rivera (Bob Dylan's violinist) among others.