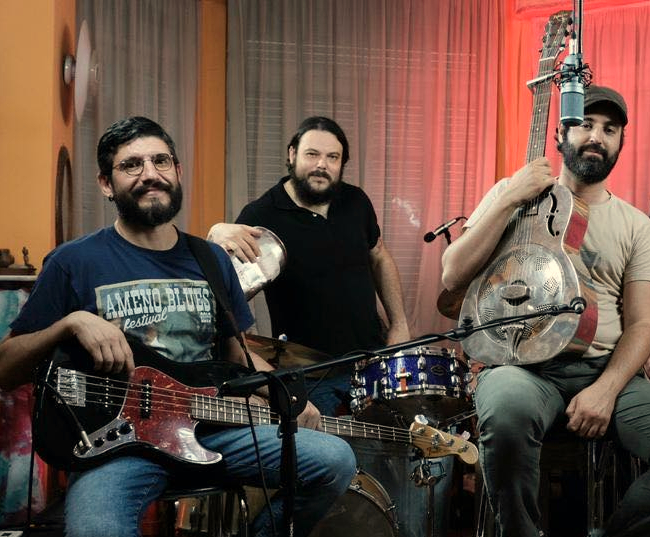 Premiere of the CD "Short Songs, To Be Strong"

Rediscovering a handful of songs written by Dave Moretti over several years and never published, the Turin band cultivates the purity of the sounds of acoustic guitars, dobro and weissenborn on a plot of percussion and bass, enriched in the various songs by gospel choirs, winds, Hammond organ, mandolin, violin and cello. Ten songs that urgently address the themes of modernity, talking about discrimination, uncertainty, beauty and contradictions of the times we live in. The album featured Francesco Piu, Alberto Gurrisi, Lino Muoio, Vito Scavo, Didie Caria, Gloria Bianco Vega, Paolo Celoria, Rémy Boniface and Francesca Roberto. The album was recorded and mixed by Dario Mecca Aleina at Attimo Recording Studio, mastered by Giovanni Versari at La Maestà Studio and on the cover the artwork of the artist of Turin origin Diego Zangirolami "La Caduta", made specifically for the Blancos album.
Blancos is the brainchild of Dave Moretti, a well-known Turin blues harmonica player who represented Italy at the European Blues Challenge 2015 and who joined on stage, among others, Luther Dickinson, Sonny Rhodes, Kenny Neal, Andy Just, Francesco Piu and Hook Herrera. Together with him in this project, the kaleidoscopic percussionist Alan Brunetta (Lastanzadigreta) author of soundtracks for the cinema, as well as winner of the Targa Tenco as a First Work in 2017, and the bassist Gianfranco Nasso, with some records published by Mescal / Sony and Emi with the historic Turin band Mambassa. Inspired by blues, gospel and folk, Blancos seek their sound in the musical roots of humanity, with a blatantly acoustic and root approach. Rethinking the skeleton of the drums, with the insertion of bins alongside the traditional drums and the use of self-built sticks with the sorghum, they propose their own peculiar key to reading the colors and African-American musicality, but coming to terms with their musical genesis and the sounds they have in their ears. On FolkClub stage, the Blancos (Dave Moretti on acoustic guitar, dobro, weissenborn, harmonica and voice; Alan Brunetta on percussion and farfisa; Gianfranco Nasso on bass and double bass) will be joined by singers Gloria Bianco Vega, author of the choral parts of the album, and Marco Peroglio, who with their voices will contaminate the songs with a gospel atmosphere, and by one of the most important guests of the album, Lino Muoio, a famous European mandolin player who grew up in Blue Stuff, a historic Italian blues group,  author of the first album in Italy entirely dedicated to the blues mandolin.