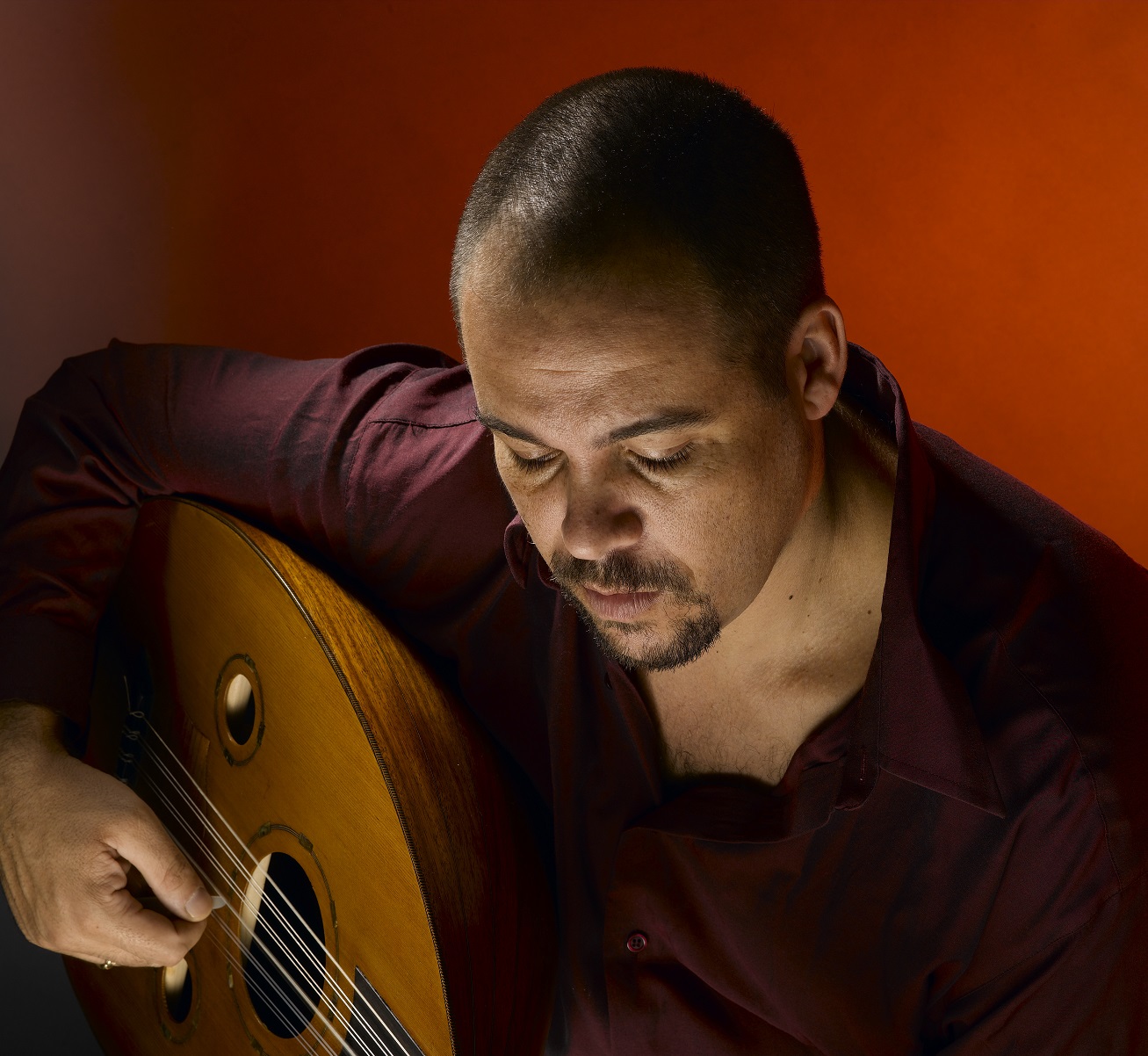 In between New York and the Mediterranean Sea. A night of jazz and more, that brings to life the true meaning of music as a cultural melting pot.  Four jazz masters meet to celebrate the transcendence of music and the ease in which it travels and put people together. From the USA, Israeli/American Jazz guitar star and oud player, Amos Hoffman, who performed and recorded with such as Jason Lindler, bassist Avishai Cohen, and Claudia Acuna. From Athens Gilad Atzmon who pays a revisit to the club. Gilad recorded and performed with a huge list of rock and jazz legend  that includes Pink Floyd, Robert Wyatt and many others. From Turin one of Europe most gifted drummers, Enzo Zirilli. Collaboration between Gilad and Enzo has lasted more then 10 years in a lot of different project as well as the Gilad’s Orient House Ensamble.
Amos Hoffman (pronounced AH-mus) is an Israeli Jazz Guitarist & Oudist known worldwide as a pioneer in fusing the rhythms and melodic themes of the Middle East with Modern Jazz.
Hoffman started playing guitar at the age of 6, and the oud a few years later. He studied guitar privately, and later attended the prestigious Rubin Academy of Music in Jerusalem. His search for new musical experiences led him first to Amsterdam, and then to New York City, where he played jazz with both established musicians and up-and-coming talents like Jason Lindler, bassist Avishai Cohen, and Claudia Acuna. To date, Hoffman has recorded 5 solo albums: The Dreamer (1999), Na’ama (2006), Evolution (2008), Carving (2010), and his most recent release, Back to the City (2015).  He has also contributed on dozens more for artists in Israel and worldwide including Avishai Cohen, Kiko Berenguer (Spain), and Jan Mlynarski (Poland). In 2013, Amos was awarded one of Israel’s most prestigious prizes – The Landau Prize for Arts and Sciences for Outstanding Achievement in the field of Jazz. Now based in the U.S., Hoffman looks forward to creating new musical adventures and reaching an even larger audience.
Gilad Atzmon is a British Jazz artist and author. Gilad was born in Israel in 1963 and trained at the Rubin Academy of Music, Jerusalem (Composition and Jazz). A multi-instrumentalist he plays saxophones, clarinet and ethnic woodwind instruments . His album Exile was the BBC jazz album of the year in 2003. He was described by John Lewis at the Guardian as the “hardest-gigging man in British jazz.” Atzmon tours extensively around the world. His albums -he has recorded fifteenth albums to date- often explore political themes and the music of the Middle East. As a member of the Blockheads, Gilad has also recorded and performed with Ian Dury, Robbie Williams, Sinead O'Connor and Paul McCartney. Gilad has also recorded with Robert Wyatt and the Water Boys. In 2014 he recorded with Pink Floyd and is featured on their last album "The Endless River" (Anisina). In 2000 Gilad founded the Orient House Ensemble in London and started re-defining his own roots in the light of his emerging ethical awareness. The band has toured around the world, recorded 15 albums and won many awards.
“A formidable improvisational array... a jazz giant steadily drawing himself up to his full height...” (The Guardian)
“The best musician living in the world today” (Robert Wyatt)
"Gilad Atzmon, the expat Israeli saxophonist/clarinetist, combines thrilling jazz musicianship with a maverick political intelligence" (The Guardian)
"Like the best of albums" (Jazzwise)
"One of the finest alto players around, Gilad pays his respects to Bird ...It's striking how similar Gilad's sweet, open-throated sound is to Parker's, but as you'd expect from the fiery philosopher-turned-Blockhead, this is no tribute album." (BBC Music Magazine)
Enzo Zirilli is considered one of the most creative and versatile drummers/percussionists of the last generations. Endowed with a great musicality, which has led him to absorb and customize every form of contemporary music, he has been active for more than twenty-five, having played and recorded around the world with great African-American, Italian and European musicians belonging to the areas of jazz, world music and pop, including: Dado Moroni, Enrico Pieranunzi, Bob Mintzer, Charlie Mariano, Steve Grossmann, Eddie Gomez, Antonio Forcione, James Moody, Tom Harrell, Ira Coleman, Rossana Casale, Marco Pereira, Ivan Segreto, Peppe Servillo, Flavio Boltro, Ares Tavolazzi, Larry Nocella, Randy Brecker, Gloria Gaynor, Fabrizio Bosso, Rosario Giuliani, Furio Di Castri, Emanuele Cisi and many others. After being born and raised musically in Turin, in 2003 he moved to London, where in a short time he established himself as one of the most sought-after musicians in the United Kingdom and began to collaborate with some of the musical icons of British and international jazz such as Jim Mullen, Stan Sulzmann, John Etheridge, Liane Carroll, Ian Shaw, Omar LyeFook and Hamish Stuart (for 10 years alongside Paul McCartney) and other musicians of the last generations such as John Parricelli, Gilad Atzmon, Alex Garnett, Brandon Allen, Quentin Collins, Ross Stanley. He teaches Jazz Drums at the Conservatory of Turin.
Danilo Gallo. Supreme producer of rhythmic gravity. To do this he uses the double bass, the electric bass, the acoustic bass, the bass balalaike, the double bass lute... Born in Foggia in 1972, he is a member and emanation of the collective El Gallo Rojo Records. His "references"? Uri Caine, Cuong Vu, Marc Ribot, Gary Lucas, Chris Speed, Rob Mazurek, Steven Bernstein, Elliot Sharp, Anthony Coleman, Ben Perowsky, Jim Black, Ralph Alessi, Tom Rainey, Angelica Sanchez, Mike Patton, Napoleon Maddox, Jessica Lurie, Alexander Balanescu, Bob Mintzer, Benny Golson, John Tchicai, Famoudou Don Moye, Steve Grossman, Enrico Rava, Francesco Bearzatti, Cristina Donà, Giovanni Falzone, Pietro Tonolo,  Giancarlo Schiaffini, Enzo Favata... among others. Winner of the Referendum organized by Musica Jazz Top Jazz 2010 as best Italian bass player.