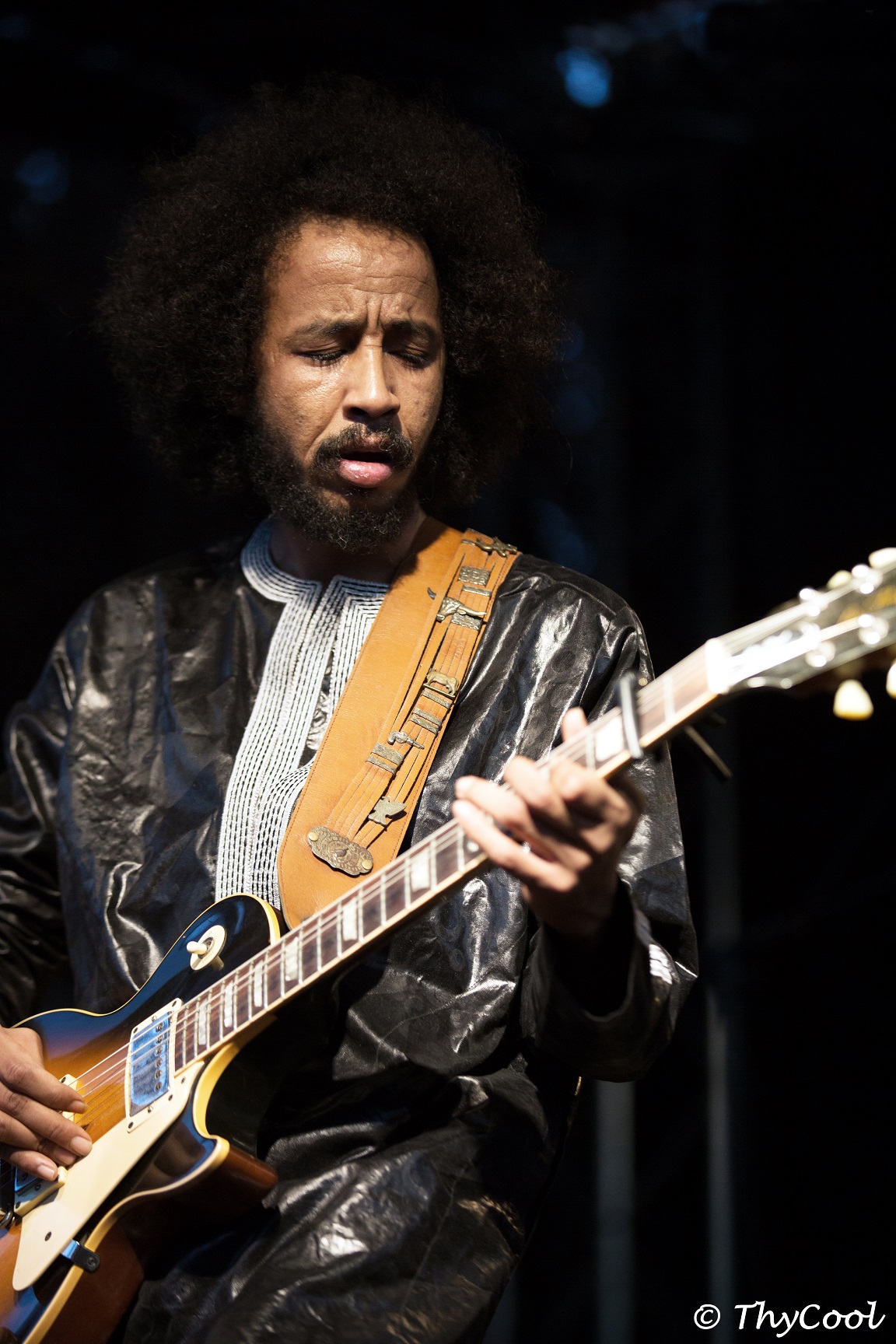 Tamikrest in tamasheq language means 'conjunction, connection, knot, coalition'. The members of the group come from different horizons (Mali, Niger, Algeria). Wanting to fully assume their Tuareg identity, they found in music the means to express it. All around the city of Kidal, the Malian desert extends in every direction: dry, arid and endless horizons of sand and rocks. This is the southwestern part of the Sahara, the home of the Tuareg, of which the city of Kidal is one of the main cultural centers. Battlefield, conquered and reconquered, remains the symbol of Tuareg daring and hope, the spiritual home of a people without roots. This is where Tamikrest first came together as a band. Their music blends the musical traditions of their people with rock and blues, accompanying the melodic lines with the characteristic vocal youyou of the singers, while the lyrics are sung in the Tamasheq language. They first came into contact with music while attending the Les enfants de l'Adrar school in the Tinzawatène oasis. Most of the members of the group take part in the war for the autonomy of the Tuareg people, which began in the 1990s, and some of their family members and acquaintances lose their lives during this conflict. In 2006 they decide to lay down their arms and use music as a non-violent means of communication. They start their careers playing mostly traditional music. But soon they come into contact, thanks to the internet, with rock and blues artists who contribute strongly to shaping their music. In January 2008 they had the opportunity to play with Dirtmusic at the Essakane Festival au désert, and the following year they participated in the recordings of the group's second album, BKO, in Bamako. That's when Chris Eckman makes himself available for the production of their debut album, Adagh, which comes out in 2010 on Glitterhouse Records. Since the release of their first album, Tamikrest are considered the founders of the new Tuareg generation and have long had the merit of having opened new roads between desert blues and western rock. From their debut onwards, they put their soul into their music, release after release. Chatma, their third album, released in 2013, is hailed as one of the best albums of the year in the world. Songlines Magazine awarded them Best Group, while their live performances showed the world a band whose sound sparkles. With the album Kidal this blaze spreads! Recorded in Bamako in the summer of 2016, produced by Mark Mulholland and mixed by David Odlum, Kidal required two years of work, says Ag Mossa, ...because we share the same difficulties as our people. And the songs on this record reflect their joys, their pain and their unwillingness to accept things as they are. From the intensity of Mawarniha Tartit, through the sweet slide guitar of second guitarist Paul Salvagnac on Atwitas, to the cold-blooded roar of Adoutat Salilagh, Tamikrest are a band on fire with a passion for their people and the centuries of injustice they have. he endured. Their songs speak of dignity, says Ag Mossa. We consider the desert as a place to live in freedom. But for many it is only a market to be sold to multinationals, and for me this is a huge threat to the survival of our nomads. The band pays tribute to the place that raised them. Their music is a cry of suffering and a cry of rebellion. It is power and endurance. I wrote most of the songs while I was in the desert, explains lead singer and guitarist Ousmane Ag Mossa. But that's how it had to be: if you want to talk about a certain situation, you have to live it. Tamikrest music has its roots in the Tuareg tradition, but burns with a bright, modern flame. My love is my country, my ambition is freedom, sings Ag Mossa in War Tila Eridaran. No living being should live in oppression, infamy and eternal repression. This is the music of the people who carry on their battle every single day, and for which the idea of ​​what it represents is almost as important as the place itself. There is a raw beauty in Tamikrest's rock'n'blues. It is there, in the pressing rhythm that feeds the songs, in the slender and sinuous bass lines, in the guitars that intertwine around the melodies and in the completely natural musical union of the Sahel, the Maghreb and the West. There you can see the reflection of different influences such as Pink Floyd, Rachid Taha and flamenco, yet the Sahara and its inhabitants always remain firmly in the center. This music was founded on a very specific cause, the cause of the Tuareg, says Ag Mossa, and perfectly celebrates their identity: that of the guardians of an ancient cultural voice in danger of extinction. The substance does not change even in the latest album, Tamotaït, released on March 2020 by Glitterbeat Records. This fifth disc does not differ from the sounds the group had accustomed us to in previous works: rock'n'blues mixes with ethnic music, giving life to a psychedelic combination in which guitars are the absolute protagonists. There are echoes of Stones, even if it is meditative and pathos-laden atmospheres that dominate the record, but there is no lack of world music reminiscences that, for a moment, make us think of our De André by Crêuza de mä. Hypnotic riffs of blues guitars follow each other in each track and mix with Berber vocalisms, creating an alienating and powerful effect on which lyrics that have the flavor of pain and years of abuse are based: We are the Kel Tamasheq people, becoming servants of servants / We are the people who hope for a better day. Tamotaït's music, which - not surprisingly - means hope for change, is music that comes from an urgency; it is music of freedom and hope in the future, and we need it too.