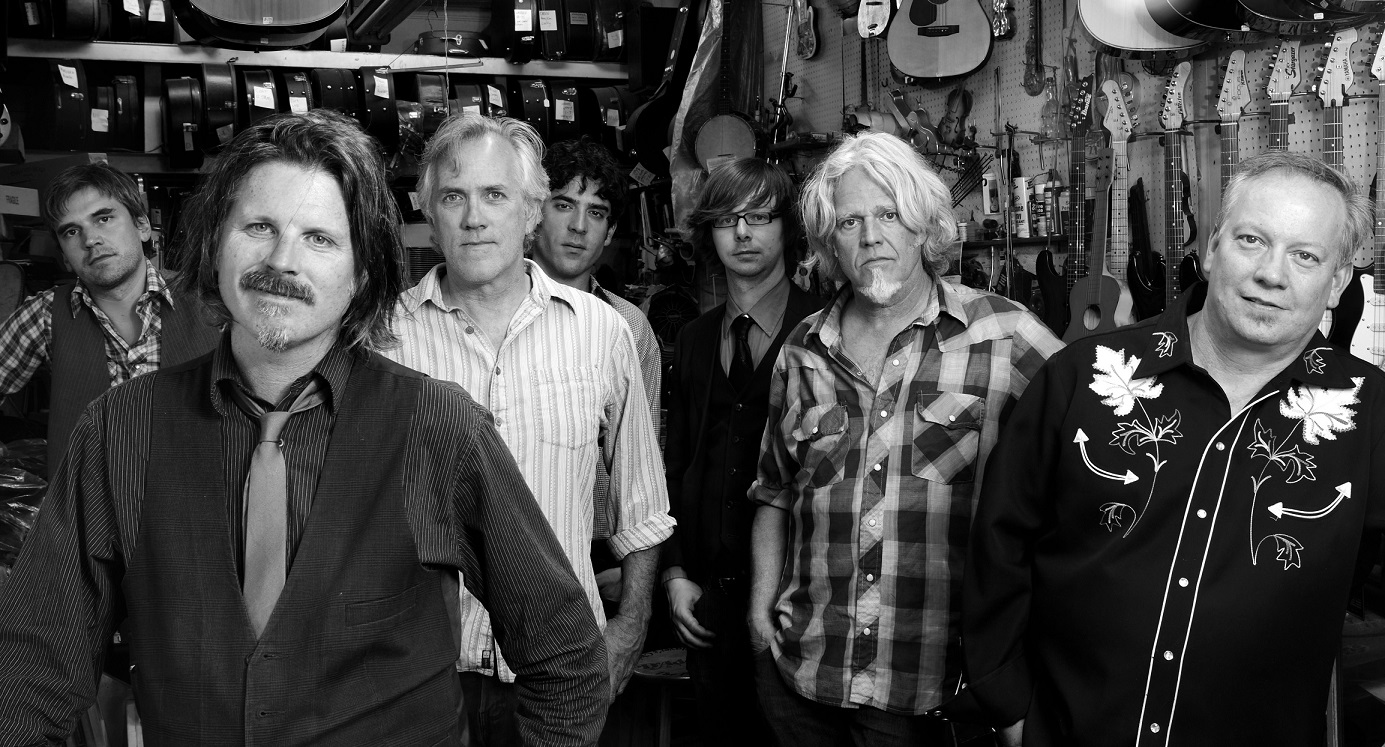 Often found in the balance between the two genres, the American Session could be called a rock band in a teacup or perhaps a folk group in a bottle of whiskey (Rolling Stone magazine said). This extraordinary collective of talented musicians, which it would be simplistic to call a band, was born in the live dimension and features original instruments, such as a pre-war Parlor guitar, an ancient Estey organ, a mandoloncello (a relative of the lute) and a harmonica that survived a fire. Their show is truly overwhelming and is based on a simple and original format: an old condenser microphone resting on a table and the musicians all around who intertwine voices and instruments as in the best bluegrass tradition, a warm, familiar situation, which already on occasion of their concerts in April 2015 and April 2018 seemed absolutely perfect for  FolkClub. The show often sees the involvement of guests and special guests such as Dennis Brennan, Peter Wolf, Patty Griffin, Rachael Price, Aoife O'Donovan and many others. No two concerts of American Session are alike: they are an all-star band, but their shows are the meeting of a group of friends who find themselves playing together, creating an atmosphere of complicity and mutual enjoyment in which immediately the public gets involved. It is a band that knows how to have fun and entertain, but knows how to reach the essence of the song and masterfully return it to the public. The challenge of being able to transport all these atmospheres and improvisations on a disc was won with their fifth splendid CD: Pack up the circus masterfully produced by folksinger Anais Mitchell, together with all the musicians of the band. The group was formed in 2004 in Boston on the idea of ​​applying the typical way of Irish folk, in which musicians sit in a circle around a table, to American folk music, hence the name. The original sextet began with traditional and classic Bostonian country songs, and then opened up to original compositions by authors such as Jimmy Ryan, Mark Sandman (Morphine), and Dennis Brennan. Their recording debut, The table top people volumes 1 and 2 (2005), has influenced numerous groups that have adopted their original musical formula, and has secured them numerous gigs as a support band for renowned folksingers (Peter Wolf of J. Geil , Patty Griffin, Buffalo Tom's Bill Janovitz, among others). The group quickly grew from gigging at clubs to a regional institution for the Boston area, playing for national and international festivals and theaters in the US and Europe. "We do this in front of people, we share ideas, we express ourselves spontaneously and we collaborate with whoever is available. There is an energy from 'everything flows and anything can happen'. People understand that this is not just a band, but a prehistoric experience that cannot be rendered on youtube, you have to be there" Cavanaugh explains. Session Americana has received numerous awards and nominations: Best Roots Act and Best CD for Improper Bostonian, Best Folk Act and Best Live Residency, and nominations for Best Americana Act and Best Live Act at the Boston Music Awards. Buffalo lead singer Tom Bill Janovitz said about them: "each concert reproduces that magical night in front of the fire at the summer camp you spent when you were a boy and you never forgot". The various members of the band boast prestigious collaborations with, including the others, Treat Her Right, Patty Griffin, Lori McKenna, The The, Dennis Brennan and Kris Delmhorst. In 2016 the band released another splendid album called Great Shakes and produced by mandolinist Jefferson Hamer who enters the project on a permanent basis. It is the tenth album of the American Session and is received with acclaim by critics, winning the title of Album Of the Year at the Boston Music Awards. The American Session is a real collective of musicians who, in addition to those who will be present at FolkClub, include: Dietrich Strause, Jefferson Hamer, Alec Spiegelman, Adam Moss, Anais Mitchell, Zach Hickman, Charlie Rose, Duke Levine, Eliza Carthy, Jennifer Kimball, Kimon Kirk.
North East is the title of the latest album, the twelfth overall including 5 lives by the cult band from Boston. North East is a tribute to their land, New England, a frontier land, of landings by sea from Europe, especially from England and Ireland. 14 songs, all covers signed by the greatest songwriters and bands of the North East: James Taylor, Jonathan Ritchman, Morphine, Pixies, Patty Griffin, Donna Summer, Tom Rush, Carly Simon, Bill Morrisey etc etc. A record that becomes the manifesto of a music scene and which is a great tribute to the essence of folk music. Songs from different eras yet so current that they enhance the qualities of the American Session capable of contaminating folk with rock, blues and psychedelia. The Italian version published by Appaloosa Records contains 3 more songs than the other editions. North East manages to photograph on disk the magical experience of the live shows of Session Americana, one of the most important contemporary American bands.
At Folkclub: Ry Cavanaugh (guitar and vocals), Billy Beard (percussion and vocals), Dinty Child (mandolin, pedal steel, dobro, vocals), Jon Bistline (bass and vocals), Jim Fitting (harmonica and vocals) and Ali McGuirk (guitar and vocals).
This is a collective, a community, it's not just a band: it's an experience (Redline Roots)
If they play less than 100 miles from your home, go there, and you will be amply rewarded for your effort (Metroland).
http://www.sessionamericana.com