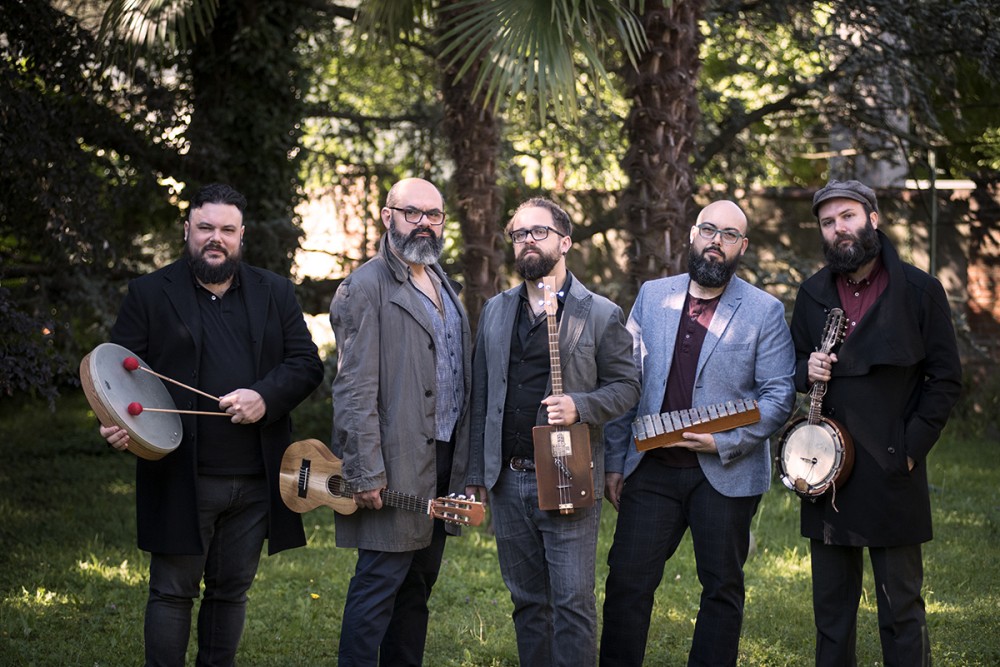 The Turin collective Lastanzadigreta has built a solid reputation in recent years on stages throughout Italy carrying around Creature selvagge, with which in 2017 it won the Targa Tenco award for best First Album. Lastanzadigreta arrives at the FolkClub to present his eagerly awaited second album, Macchine Inutili, to be released by Sciopero Records in Fall 2020 and financed with the MiBAC / SIAE call as part of the Per Chi Crea program.
Macchine inutili wants to be in the title a tribute to the work of Bruno Munari, who between the thirties and fifties of the twentieth century developed a series of drawings and sculptures dedicated to useless machines because they do not manufacture, do not eliminate manpower, do not save time and money, they don't produce anything marketable. Munari's finding that the world today is made up of machines and that in a few years we will be their little slaves appears decidedly prophetic today, considering it was expressed more than sixty years ago. The role of useless machines is then also that of resistance through art to the dictatorship of machines (which can easily be read today as resistance to the deteriorating aspects of post-capitalism in the era of globalization: the alienation of the individual, the repressive control, homologation). In Munari's intentions, useless machines are nothing more than colored moving objects [...] to be looked at as you look at a moving complex of clouds after spending seven hours inside a useful machine workshop. These machines that are useless, in Lastanzadigreta's perspective, are very similar to songs. If Creature selvagge started from the idea of ​​creativity as a gift -in fact- wild, to be tamed and made concrete in small songs through collective work, teaching and taking care, making music together, Macchine inutil instead starts from reflection on function of (author) songs in the contemporary world. Where the uselessness, of course, is such only if measured on the dominant values ​​of profit and individualism: it instead represents the last form of resistance, the very essence of the possibility of making music (and an art) that has still a civil, social and political value. But, in a broader sense, useless machines are also musical instruments: mysterious objects until their sound is known. From the point of view of Lastanzadigreta's eco-sustainable philosophy, which aims to make music with every possible object, accepting the idea of ​​useless machines therefore means acknowledging that one can, and must, make music with everything -beware of reuse, recycling, to the new life that simple everyday objects, or waste, or broken tools, can still have.
Lastanzadigreta will arrive on FolkClub's stage with a special set, including marimbas, glockenspiel, guitars of various kinds, sound toys and bins. One wonders how they will stay there.
Lastanzadigreta is Alan Brunetta (marimba, keyboards, percussion, vocals), Leonardo Laviano (vocals, acoustic and dobro guitars), Umberto Poli (electric guitars, cigar box, vocals), Flavio Rubatto (theremin, percussion, keyboards, vocals) and Jacopo Tomatis (mandolins, toys, synths, vocals).
https://www.lastanzadigreta.com/