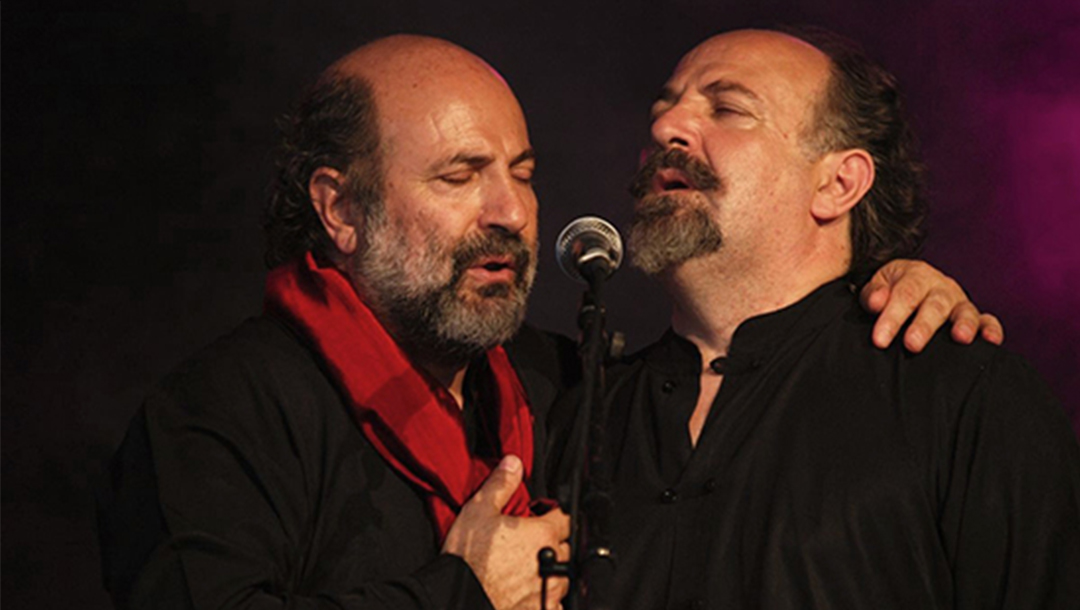 Strengthened by an international consecration and awarded numerous awards, from the Recanati Prize to the Sound Track Stars Prize, and with a consolidated collaboration, as composers, performers and actors, with theater and cinema, the Mancuso Brothers, with Manzamà, reach their eighth album. Natives of Sutera in the province of Caltanissetta, in the 1970s they emigrated to London where, for eight years, they worked in a factory, while in the book time, in contact with clubs and theaters, they began to reconstruct the fragments of the musical heritage of their land. Back in Italy, in the early 1980s they performed in Germany and France, mostly in small theaters. The meeting with Joaquin Diaz, the great Spanish ethnomusicologist, a living monument of Iberian folk, with whom they start a collaboration relationship that leads to the publication, in Spain before that in Italy, of their first two CDs, Nesci, was decisive for their career. Maria (1986) and Romances de alla y de aca (1990). In 1993, after dedicating another CD to their native country, they won the Recanati Prize. In 1997 they released the CD Bella Maria, and participated, as composers and actors, in the film The talent of Mister Ripley by Anthony Minghella, inaugurating a collaboration with cinema and auteur theater that still lasts and has a privileged reference in the works by Emma Dante. In 2013, at the 70th edition of the Venice Film Festival, they won the Sound Track Stars Award and, the following year, they obtained the nomination for the Golden Globe and the Silver Ribbon for the soundtrack of the movie Via Castellana Bandiera directed by Emma Dante. Imprtant to remember, in their discography, Italian Odissey, recorded in 2000 for Putumayo World Music Records, and distributed all over the world, Cantu, from 2002, and the CD released once again in Spain, in 2004, Trazzeri. In 2017 they won the Lifetime Achievement Award of the National Loano City Award, one of the highest folk music awards in Italy.
Composers and multi-instrumentalists animated by a poetic and musical vein of absolute originality, Enzo and Lorenzo Mancuso sing stories interwoven with ancient idioms and sounds that, in the whirlwinds of a continuous storytelling, incessantly return to their native land, Sicily, where thanks to their art apparently irreconcilable worlds seem to merge. Privileged heirs of a tradition that they have transfigured into the prism of their innumerable instruments and standard bearers of an intimate and essential song, with Manzamà they return to weave yarns of extraordinary workmanship, in an admirable balance between the thread of personal memory and the solemn breath of history. Immersed in an almost dreamlike dimension, intimate and sometimes even painful pictures of everyday life open up, with glimpses of great impact, on the tragedies that tear our present apart. Over ten years after the last unpublished album, Manzamà is configured as the culmination of an out of the ordinary creativity and makes use of the precious contribution of other artists and composers, including Franco Battiato and Aldo Giordano (who have taken care of the arrangements) , Marco Betta, German Diaz, Ferruccio Spinetti and Giovanni Sollima. In the rich libretto, the original paintings by Beppe Stasi commented on songs that exude experiences lived in the first person, during a decidedly extraordinary career.
[…] We were born in the fifties of the last century. We have known the Sicily of crafts, peasants, emigrants. We had time to hear from the voices of women and men the songs in the churches, in the streets, in the artisan shops, in the mule tracks, among the fields. In leaving Sicily, together with our baggage, we brought with us the sound reminiscence of that world which over time has become the yeast and salt of our musical imagination. Over the years, that baggage has been enriched by the noises of the cities, factories, voices of the world, poets and musicians we have known, all bearers and witnesses of a wonder of the world that has made our gaze and our our expression. Thanks to all this today we know what a song is made of, we know that it has to do, in some way, with the sight of a landscape, with the warmth of a handshake, with the sound of a word, with the wound that she is constantly searching for a name that identifies her, with the memory of the living who are no longer alive. We know, and this is especially our case, that singing is our brotherhood, this alternation of breath and memory that keeps the embers of the voice alive and in its incandescence merges into a single sound, groan, expression. This song seems to us a good calligrapher: it makes every writing legible, every erasure with which life writes its novel. And it is with this image, with these simple words in which our research is identified, that we take our leave. (speech delivered on the occasion of the Doctorate Honoris Causa which was awarded to them by the University of Messina in July 2019).

The Mancuso brothers are the best that Italy has to offer musically, a judgment that I should perhaps extend to all of Europe. I was able to define their Bella Maria album as the best CD of the 20th century and subsequent CDs have all been sublime masterpieces. (...) The richness of this new CD, however, can hardly be surpassed. A record of sublime growth, and if I had to buy just one CD this year, I would definitely buy this one. […]. An absolute must! (Moors Magazine)

The Mancuso Brothers are among the most authoritative voices of a Sicilian music that looks at the living flesh of folk and puts it in the whirlwinds of a continuous storytelling. (Valerio Corzani, RSI-Radio Switzerland Italian)

The combination of their earthy voice and fine instrumental orchestration gives their folk an artistic touch that can be called stunning. (Eric Van Domburg, Heaven Magazine)

Sometimes it is necessary to overcome 'gender' issues and proclaim that the Italian dialect folk musical traditions can rise to levels of international dignity. Evident proof of this are the Mancuso Brothers (...) with Manzamà, a very refined product (...) Listen to him and you will thank me (Andrea Trevaini, Buscadero).