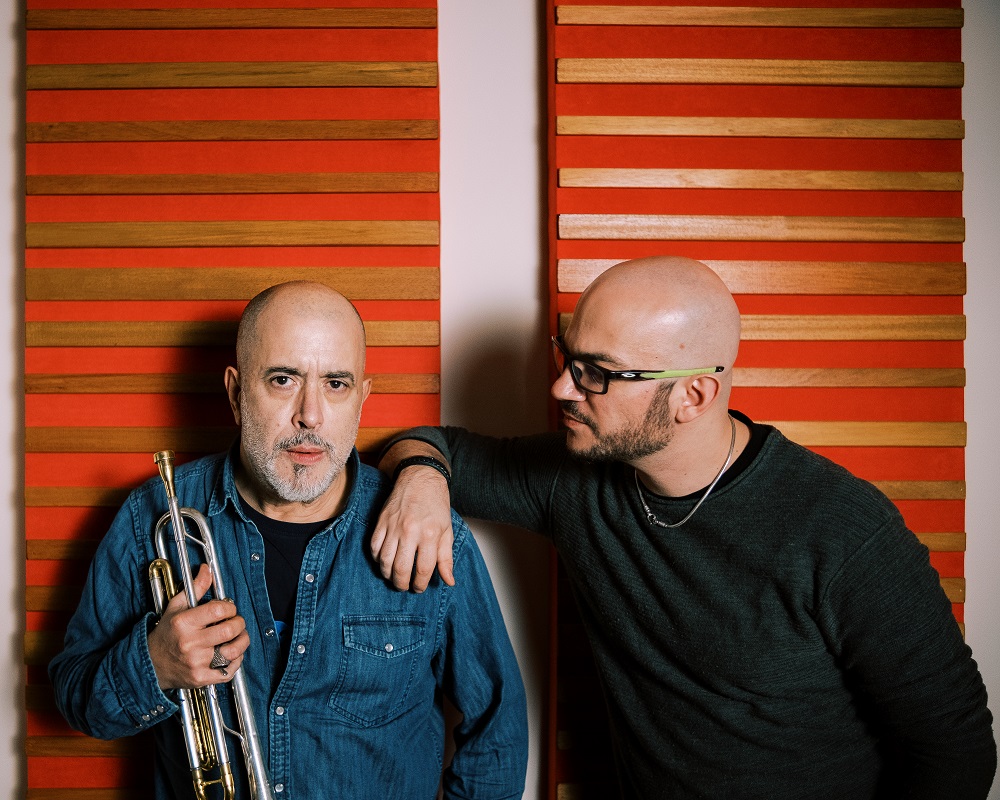 An extraordinary encounter characterized by an expressive charge of the highest level, alternating with moments of profound artistic intensity, in a repertoire that moves freely between original compositions and jazz standards. Flavio Boltro, reference trumpet of Italian jazz, and Fabio Giachino, one of the most virtuous young Italian pianists, after sharing numerous musical experiences, reach an exceptional artistic intimacy, which finds luminous expression in this new record, produced by Cam Jazz .
Flavio Boltro. Born in Turin in 1961 to a trumpeter father, who has always been passionate about jazz, and a teacher mother. Immersed in jazz from an early age, at the age of 9 he began playing the trumpet and, at 13, he enrolled at the Conservatory, where he studied with Carlo Arfinengo (trumpet of the Turin Symphony Orchestra), who will follow him to prepare him for the admission exam to the Conservatory, which he will attend for seven years. At the age of 25 he joined the Lingomania line-up, with Roberto Gatto on drums, Furio Di Castri on double bass, Maurizio Giammarco on sax, Umberto Fiorentino on guitar, who will win the award for best record twice in a row and best group of the year. The collaboration with Steve Grossman dates back to the same period, with whom he regularly performs in international clubs and festivals in quintet with Cedar Walton, Billy Higgins and David Williams in the rhythm section, but also with Clifford Jordan and Jimmy Cobb. His is the trumpet solo in the theme song of the sitcom Casa Vianello, aired from 1988 to 2007 (first on Canale5 and then on Rete4). Another decisive formation for his musical career is the original trio with Manu Roche on drums and Furio Di Castri on double bass, then expanded into a quartet with the arrival of saxophonist Joe Lovano. In 1984 he was elected Best Talent by the specialized magazine Musica Jazz. In the early nineties he performed at the Calvi Festival with Antonio Faraò, Manu Roche and Paolino Dalla Porta. In 1994 Laurent Cugny chooses Flavio Boltro and Stefano Di Battista as trumpeter and saxophonist of the ONJ, shortly before leaving which Boltro will enter the sextet of Michel Petrucciani. The quintet was formed in 1997 with Stefano Di Battista, Eric Legnini on piano, Benjamin Henocq on drums and Rosario Bonaccorso on bass. Among the various musicians with whom he has collaborated, there are Dado Moroni, Andrea Pozza, Rosario Giuliani, Giovanni Tommaso, Roberto Gatto, Fabio Zeppetella, Billy Cobham, Dario Chiazzolino and many others. He participated as Guest Star in the European Laid Black Tour of Marcus Miller, bassist, composer and record producer from New York, winner of two Grammy Awards, nicknamed 'the superman of soul', considered one of the Masters of funk.
Fabio Giachino, born in 1986, is considered one of the greatest talents to have appeared on the Italian music scene in recent years. Born in Alba and later moved to Turin, he has been awarded with important awards in all the main Italian and European prizes. As a soloist he was awarded the Massimo Urbani International Award 2011, the Chicco Bettinardi National Award 2011, and the JazzUp channel's Red Award Revelation of the year 2011. In trio he obtained the Special Award as Best Band at the Bucharest International Competition 2014, the Fara Music Jazz Live 2012 award (both as best soloist and best group), the Barga Jazz Contest 2012 award and the Carrarese Padova Porsche Festival 2011 Award. was voted for four consecutive years, from 2011 to 2014, among the top 10 Italian pianists according to the JazzIT Awards referendum; In 2013 and 2014 he too was voted in trio among the top 10 Italian groups. The debut album Introducing Myself recorded as a trio with the special participation of saxophonist Rosario Giuliani and the second trio album Jumble Up, were respectively included in the 100 Greatest Jazz Albums 2012 and 2013 again according to JAZZIT magazine. Parallel to classical academic studies (concluded with the diploma in organ and the second level degree respectively in 2006 and 2009) he studied jazz following private lessons and workshops with: Antonio Faraò, Dado Moroni, Riccardo Zegna, Danilo Rea; Franco D'Andrea, Stefano Battaglia, Gianluigi Trovesi, Pietro Tonolo, Furio Di Castri (Siena Jazz 2007 where he won a scholarship for 2008); Barry Harris, Joey Calderazzo, Kurt Rosenwinkel, Scott Colley, Jeff Tain Watts, Salvatore Bonafede (Saint Louis College Rome). In March 2012 he finished the two-year jazz period at the G. Verdi Conservatory in Turin with Furio Di Castri and Dado Moroni. In 2011 he flies to Detroit with Emanuele Cisi for an exchange between the Turin conservatory (jazz department) and the Wayne State University of Michigan, where he performed with the university's big band and their professors.

In 2009 and 2012 he studied privately in New York with Fred Hersh and Hal Crook. He carries out an intense concert activity that has seen him perform in: Germany, France, Switzerland, Belgium, Spain, Denmark, England, Czech Republic, Poland, Turkey, Romania, Canada, USA and all of Italy. In 2015, in trio, he officially represented the city of Turin in Brussels and Barcelona in honor of Expo-TO. In 2016 he was selected by the National Jazz Musicians Association for a three-month artist residency at the Italian embassy in Copenhagen, where he performed in the main festivals and in the most important diplomatic institutions. In the jazz field, he has collaborated among others with: Dave Liebman, Furio Di Castri, Emanuele Cisi, Fabrizio Bosso, Rosario Giuliani, Maurizio Giammarco, Marco Tamburini, Dino Piana, Gegè Telesforo, Aldo Mella, Aldo Zunino, Nicola Angelucci, Enzo Zirilli , Gilad Atzmon, Javier Girotto, Miroslav Vitous, Achille Succi, Davide Pastor, Benjamin Koppel, Mark Nightingale, Juan Carlos Calderin, Dusco Goycovitch, Diego Borotti, Paolo Porta, Massimo Manzi, Luca Begonia. In the Pop and R & B fields, he has worked among others with: Roy Paci, Motel Connection, ENSI, Dj2P.
Giachino proposes a creative, lyrical and current language that has its roots in the history of Jazz and then looks ahead. (Dado Moroni).