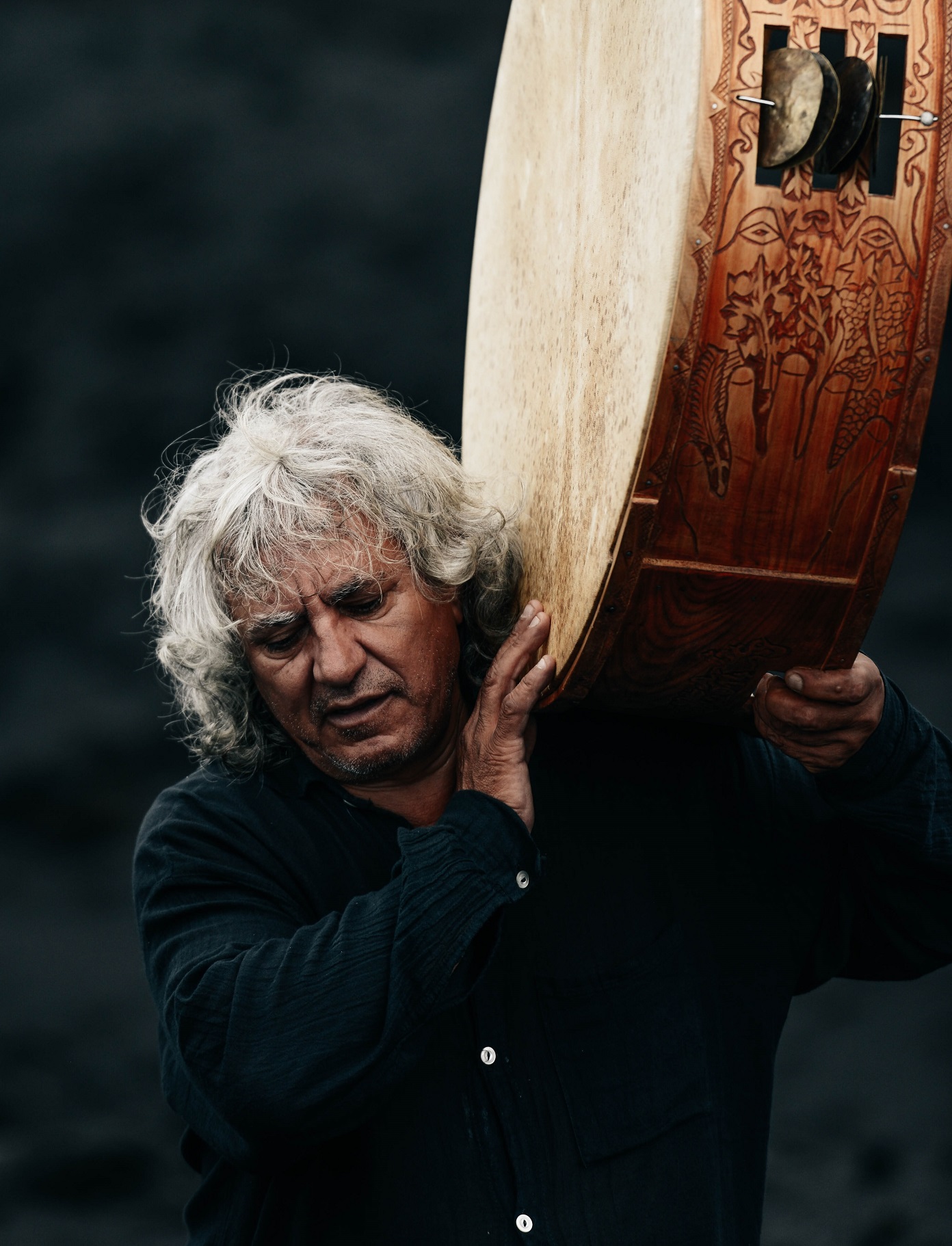 Alfio is perhaps the last depositary of a traditional knowledge, of the pastoral culture, which he has learned with a direct relationship, and therefore not only musical; represents the last heir of a great tradition, but also a poet and an artist endowed with his own and unique personality, of those figures who in the popular world leave their mark and in the ancient world would have created and left their own imprint even in a oral epic tradition, then handed down over the centuries. At the same time he is also an innovator, both for his original lyrics and for the instrumental technique, the research work on the drum, in the sound and in the construction. Alfio is considered today the absolute master of the frame drum in the world, for his technical and expressive skills, always at the service of music and narration, but also for the mastery of the construction techniques of the instrument.
Alfio Antico was born on November 22, 1956 in Lentini, in the Sicilian hinterland of the province of Syracuse. He lives as a shepherd in a land populated for millennia, with strong ties to the tradition of Magna Graecia, in the mountains, breathing fairy tales, stories and myths of peasant culture handed down by his grandmother, who teaches him to play with her own 'magic' tambourine, Alfio however is not only the keeper of this tradition, the poet, the bard or the griot, but he is also the man who has chosen to be the master of his life, of his time, and at 18 he leaves the village, working and pursuing his destiny: that of a musician. We are in Italy in the early 1970s, where an entire southern youth population is on the move, looking for their own place, for a job but also for an identity to be proudly affirmed in the face of discrimination encountered in the cities. industrialists of the north. Alfio settled in Florence where, one evening in 1977, while he was playing in Piazza della Signoria, he was noticed by Eugenio Bennato. From that moment his musical career took off: invited by Eugenio, Alfio joined Musicanova, alongside Teresa De Sio, and with them he recorded five LPs. Later he collaborates with Peppe Barra's company and with Tullio De Piscopo, Edoardo Bennato, Lucio Dalla, Fabrizio De André, Roberto Carnevale, Renzo Arbore and his Italian Orchestra and again with Eugenio Bennato. In 1990 Fabrizio De André called him to record his drum in the song Don Raffaè, for the album Le Nuvole. In 1995 he was guest of honor at the Sitges International Festival (Barcelona). In 1996 he plays in Vinicio Capossela's Il ballo di San Vito. In 2006 he began his collaboration with Carmen Consoli who will publish the album Guten Morgen with her Narciso Records, embellished with a duet with Fiorella Mannoia in the song Cunta li jurnati. The same year the Sicilian drum master composes the soundtrack of the film Malavoglia by Pasquale Scimeca and is mentioned in the French film Tous les soleils by Philippe Claudel (2011), where Stefano Accorsi sings his piece Silenziu D'Amuri. On January 8, 2016, the Antico album, produced by Colapesce and Mario Conte, is released digitally. The disc is highly acclaimed by critics thanks to the sounds poised between the ancestral past and futurist visions, bucolic melodies and industrial noises, poetic texts and phonemes. Trema La Terra is the title of his latest album, produced by Cesare Basile with the collaboration of Gino Robair (Tom Waits, John Zorn) and Mattia Antico, released on March 13, 2020 by Ala Bianca / Warner. As the Sicilian journalist Giuseppe Attardi, author of the book / biography Il Dio Tamburo, published on July 2020, comments, this record is …ancestral and, at the same time, futurist. Wild and poetic, acoustic and electronic, traditional and experimental, cultured and popular, tragic and comic, theatrical and musical, bucolic and ghostly, minimal and sumptuous. Thus appears Alfio Antico in this album, in which tammurriate and tarantella intertwine with Nick Cave, Battiato, Tom Waits, Quentin Tarantino, punk and bluegrass. And he continues: the way of singing - a sort of archaic metaphonetic mix between pastoral and Lentinese jargon, mythological tales, sounds and noises of nature - is Sicilian rap.
After his concerts in 1992 and 2001, among the 33 'mythical' guests of our twentieth anniversary at the Teatro Regio in the now distant April 2008, Alfio Antico returns solo to the FolkClub after 14 years, to delight us, bewitch us and amaze us once more time with his immeasurable craftsmanship.
Close
Save