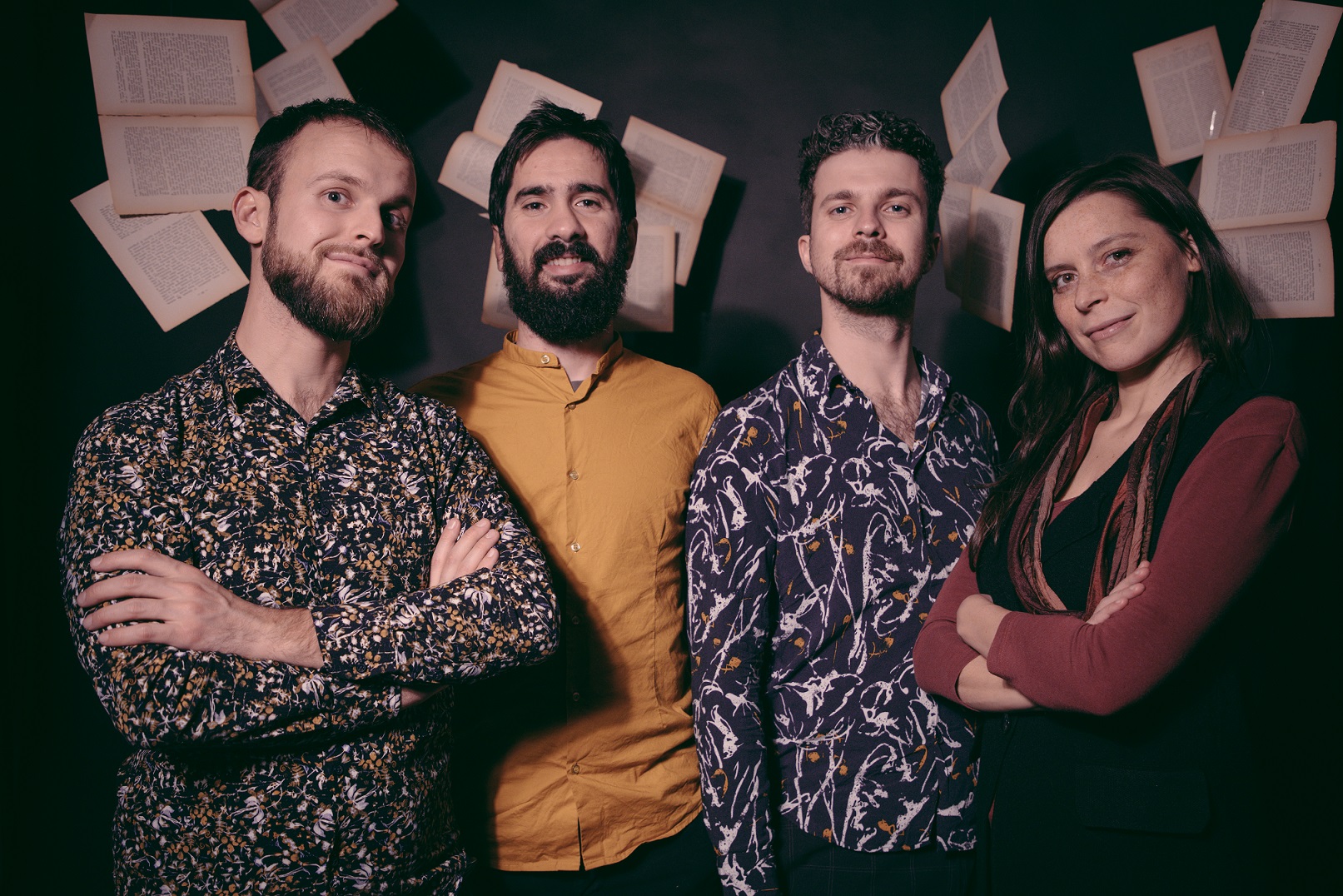 LinguaMadre is the original production promoted by the Premio Nazionale Città di Loano for Italian Traditional Music, the city of Cagliari Premio Andrea Parodi and the Mare e Miniere festival, born from the idea of ​​the journalist and author songwriter Enrico de Angelis and developed together with artistic directions of the three partners. The production premiered on 25 July 2019 in Loano as part of the Premio Città di Loano. Following the thematic thread of the 'mother' - understood both as the central figure of much popular poetry and as a language - the production has given sound and voice to the poems collected by Pier Paolo Pasolini (Italian poet, writer, director, screenwriter, playwright, journalist and philosopher, considered one of the greatest artists and intellectuals of the twentieth century) and contained in the Canzoniere Italiano published in 1955, a journey never attempted until then through Italian popular poetry and its many languages, just at the moment when in Italy, on the threshold of the economic boom, was starting the slow erosion of the dialect as the "mother tongue" of a large part of the population. Four of the most interesting talents of the new Italian folk music were chosen for this 'creative archeology' operation: the piedmontese Duo Bottasso, the friulian singer Elsa Martin and the calabrian multi-instrumentalist Davide Ambrogio, who reinterpreted the work through the lenses of contemporaneity, without philologisms but with the aesthetic sense and sound procedures of those who today play and creatively interpret music of oral tradition, creating original scores where more progressive forms alternate with more lyrical and evocative atmospheres. A musical enterprise in which the voices of Elsa Martin and Davide Ambrogio interact with the violin, trumpet and accordion of the duo Bottasso; the guitar arpeggios leave room for the ostinato lyre, the bellows of the accordion becomes a rhythmic instrument, the drones of the bagpipe support, dialogue, accompany the popular poems chosen including riddles, songs of the earth, lullabies, songs of resistance, themes for children and war songs.
We recover this concert, initially scheduled for the end of March 2020, and for the occasion the first Linguamadre album will be available, recorded live in Rome and released during the lockdown. Having seen the tour that the members of Linguamadre managed to organize in March between Northern Italy and Switzerland with great tenacity and determination canceled by the pandemic, the guys decided to publish the videos of the live that led to the birth of the album.

Duo Bottasso. The Bottasso Brothers, Nicolò on the violin and Simone on the accordion, offer world music with their own compositions and reinterpretations of traditional songs. The Duo is always looking for a mediation between the delicacy of their instruments and the disruptive energy that the two young musicians never lack: all this united by the complicity of two brothers linked by the desire to keep the tradition of their land of origin in constant evolution.
In 2014 their first album Crescendo was released, made with the collaboration of many guests including Elena Ledda, Mauro Palmas, Gilson Silveira and Christian Thoma. Crescendo does not only refer to musical terminology but also reflects the story of two musician brothers who started out from the dance music of the Occitan area of ​​Italy to enter the paths of new composition and improvisation. The Duo actively participates as conductor and teachers in the orchestral project Folkestra & Folkoro. In collaboration with the electronic musician Simone Sims Longo, in 2018 they compose and record the soundtrack of the documentary Biserta. Spiral story merged -together with some pieces of the recent collaboration with the children's choir Kinder und Jugendchor Chemnitz and with the tar player Reza Mirjalali- in the album Biserta and other stories.
The Duo boasts numerous live performances in national and international festivals including: Rudolstadt Festival (2018), Alpentoene Internationales Musikfestival in Altdorf (2017), Italian Jazz for earthquake lands (2017), Torino Jazz Festival (2016) Festival Internacional de Musica de Alturas in Lima (2016), Folkest International folk festival in Splinibergo (2015), Andrea Parodi Award (2014), Printemps des Arts in Montecarlo (2014, 2012), Festival International de Luthieres et Maitres Sonneurs in Saint Chartier (2009).
Elsa Martin. Graduated in jazz music at the Klagenfurt Conservatory (Austria), she participated in 2006 at the International Jazz Festival of the Canary Islands as a guest of the Brazilian singer Rosa Passos and was the protagonist of numerous performances in Italy and abroad. She collaborates with M° Valter Sivilotti with whom she performed in the Talk Radio shows together with the singer-songwriter Giò Di Tonno and Carmina Balcanica. She is the interpreter of the Amôrs show. In 2012 she released her first album entitled vERsO, arranged by guitarist Marco Bianchi. The album was a finalist at the Targhe Tenco award in the Opera Prima section (2012) and ranked 3rd at the Premio Città di Loano National Award for Italian Traditional Music (2013). She is the absolute winner of the 2012 Premio Parodi award, dedicated to world music, the Critics' Prize and the Best Music Prize. She received the special mention for the best interpretation conferred by the jury of musical experts at the final of the 2013 Premio Bindi award. She was ranked 2nd at the 2013 Biella Festival and won the Critics' Prize at the 2014 Premio Bianca D'Aponte award. In 2016 Elsa publishes the album Amôrs. She is appreciated by the general public as a supporter of internationally renowned artists such as Alice, Al Di Meola and Antonella Ruggiero. In 2015 she began a fruitful collaboration with the pianist Stefano Battaglia, with whom she composed the music of Sfueâi, a show inspired by the lyrics of Friulian poets.
Davide Ambrogio. It was born in 1990 in Cataforìo, a small hamlet of Reggio Calabria. In 2011 he moved to Rome where he embarked on a path of academic and musical studies, collaborating with various artists and coming into contact with different realities, first of all Etnomusa, the popular music orchestra of La Sapienza University in Rome. In the meantime he began a concert activity as a member of three ensembles with which he participated in important events throughout Italy: the Skunchiuruti, a music band from the Aspromonte Grecanico, the SIV (also recording a disc at the Abbey Road Studios in London), and Musaica, world music ensemble. In May 2016 he took part, as a teacher, in the Erasmus + Dance and music as the roots of cultural identity project, held in the city of Valencia (Spain). In 2017 he wrote and arranged the music for the documentary La quinta generazione  and collaborated on the play La Fata Morgana, written and performed by Marica Roberto. The 2018 opens with the project in solo Evocations and Invocations and the creation of Ô Sud!, a musical show on the polyphony of the Italian oral tradition by Xavier Rebut. He has participated as a musician in important reviews and festivals in Italy, France, Belgium and Poland such as SponzFest, Musicultura, Parodi Award, Mare e Miniere, Les Suds d’Arles, Le Plancher, Festival du Cinema Mediterraneé, Radio Krakow. He studied vocal technique with Gabriella Aiello, ways of peasant singing with Giovanna Marini and attended several seminars with Elena Ledda, Simonetta Soru and Luca Nulchis (Sardinian singing), Alessandro Foresti (choral singing), Dario Muci (Salento polyphonic singing), Luigi Lai (launeddas), Pietro Cernuto (friscaletto), Andrea Avena (composition and arrangement), Charles Burrell (songwriting), Reso Kiknadze (traditional Georgian music), Pekka Pylkkänen (improvisation), Albert Hera (circle singing), Dariana Koumanova (vocal coach).
http://www.duobottasso.com/it/index.php
http://elsamartin.it/
https://www.davideambrogio.com/