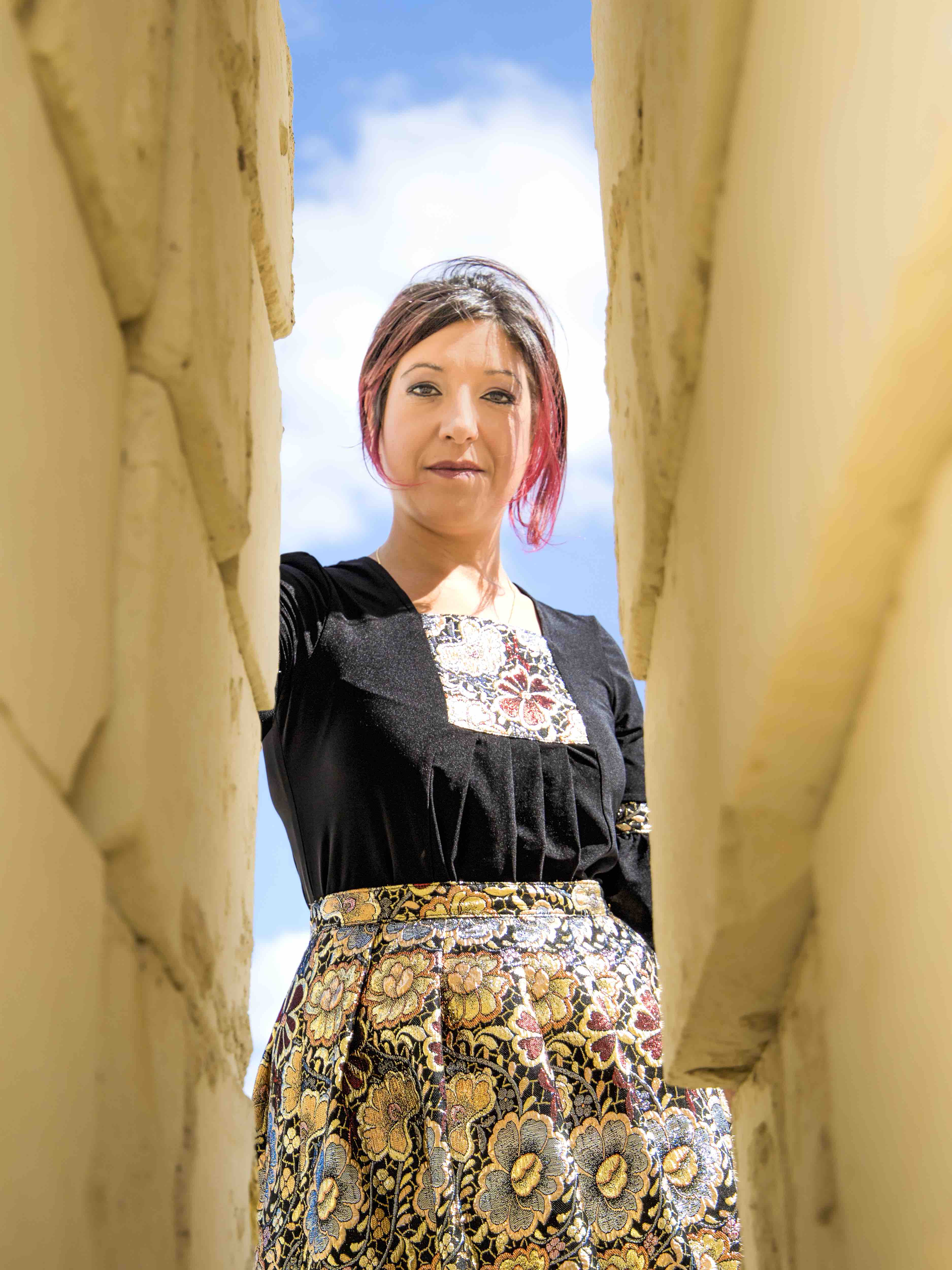 An intense and passionate reflection, from a female point of view, on the various faces of love: from the great, desperate and tender one to the sick, possessive and abused one. It's Amoreamaro, the new album by Maria Mazzotta, one of the most emblematic musical personalities of Southern Italy. Already in the Canzoniere Grecanico Salentino, Mazzotta has come to be one of the most popular voices on the European world music scene. Ten songs in all, two of which are unpublished, which fearlessly cross all the emotions that this feeling can arouse, finding catharsis, consolation, strength and 'cure' in the song, as per popular tradition. They range from stornelli to traditional songs rearranged and enriched with new sounds and words, up to the milestones that have paved the way of the great Italian song such as Lu pisci Spada by Domenico Modugno, Tu non mi piaci più brought to success by Gabriella Ferri and Rosa canta e cunta by the great Sicilian singer-songwriter Rosa Balistreri.
But the heart of the record lies in the two unreleased songs in Salento: Nu me lassare, a painful love ballad, an invocation to those who are no longer there, and the title track Amoreamaro, a pizzica, traditionally a healing rhythm for tarantolate, which ideally aims to heal a sick world. The album released on January 10, 2020 by Agualoca Records, obtained a great response from audiences and critics. 2020 saw Maria Mazzotta among the five finalists of the Targhe Tenco in the Song interpreter section (plate later assigned to Tosca); she ranks at no. 8 (among 708 nominated) among the best records of the year in the World Music Chart Europe and at number 9 of the Transglobal World Music Chart, international charts drawn up by expert journalists in the sector; she is a finalist at the Parodi Prize where she receives the section of the international jury; it ranks third in the National Prize of the City of Loano, the most prestigious award for traditional music in Italy, awarded each year to the best folk music production by a jury made up of over fifty specialized journalists and scholars; selected for the showcase at the International Kulturbörse in Freiburg, Germany, and at the Fira Mediterrania de Manresa in Spain; finalist for the Preis der Deutschen Schallplatten Kritik (Germany) and for the FolkHerbst (Germany, November 2021); receives the Vincenza Magnolo Award.

Maria Mazzotta was born in Lecce and lives between Salento and the French Pyrenees. Her particular versatility makes Maria one of the most important voices of the Apulian panorama and, more generally, of world music, to which she approaches with extreme respect and meticulous research with regard to the vocal characteristics - and not only - that distinguish the various cultures. Ranging naturally from the sounds of Southern Italy to the Balkan cadences, her heartfelt interpretation involves the viewer by dragging him and immersing her in the culture of the interpreted pieces. At a very young age she devoted herself to the study of the piano and later, at the Conservatory of Lecce, to that of the harp. In 1998, the first approach to the songs of the Salento tradition takes place through listening to the original sources and actively participating in the revived songs. From 2000 to 2015 she was part of the historic Canzoniere Grecanico Salentino, with which she recorded 6 albums and participated in the most important international world music festivals. She attends several workshops, masterclasses, deepening the various vocal techniques: with the homonymous opera singing teacher Maria Mazzotta; with Gabriella Schiavone delle Faraualla; with Sayeeduddin Dagar, one of the best known Indian Dhrupad singers; with Bobby McFerrin, who chooses her to duet with him in the 2008 edition of 'Bari in Jazz'. Turning her gaze to the East she became passionate about Balkan music and at the age of 21 Maria began a musical research with various musicians of different nationalities (Greeks, Albanians, Macedonians, Croats, Romanians, Bulgarians and Gypsies that he met in his numerous concerts). Hence the partnership with the Albanian cellist Redi Hasa which is completed by merging into a musical-cultural symbiosis from which the Hasa-Mazzotta duo springs. In 2006 she was part of the 'Notte della Taranta' orchestra conducted by Maestro Concertatore Ambrogio Sparagna. In 2011, 2012, 2013 and 2014 she is the solo voice of the 'Notte della Taranta' under the direction of M° Ludovico Einaudi, M° Goran Bregovic and M° Giovanni Sollima. Since 2013 she collaborates, as a singer, with the dance company of Miguel Angel Berna realizing the Mediterranean, La jota and la taranta, Cardia, Dos Tierras shows that lead her to perform in various theaters around the world, including Teatro Olimpico di Rome, Petruzzelli Theater in Bari, Teatro del Canal in Madrid, Suzanne Dellal in Tel Aviv. In 2015 she participates as a singer in the new film by Carlos Saura La jota. She boasts numerous collaborations with national and international artists, including Hysni (Niko) Zela and Fanfara Tirana, Eva Quartet, Klapa Otok, Bojken Lako, Paolo Fresu, Rita Marcotulli, Mannarino, Ballaké Sissoko, Ibrahim Maalouf, Raiz, Roy Paci, Orchestra of Piazza Vittorio, Piers Faccini, Justin Adams and Juldeh Camara, Roberto Ottaviano, Raffaele Casarano, Bijan Chemirani, Mario Arcari. During her career she has participated in important national and international reviews and festivals, including: Womad (Australia, New Zealand, UK), GlobalFest (New York), South by Southwest (Texas), Small World Music Festival (Canada), Rainforest (Malaysia), TarabTanger (Morocco), Thresholds (Saudi Arabia), Womex (Greece), Babel Med Music (France), Les Suds in Arles (France), Sete Sois Sete Luas (Portugal and Spain), Karneval der Kulturen ( Germany), At-tension (Germany), Festival Mito (Milan).

Antonino De Luca was born in Messina on January 9, 1991, he began studying music with his father at the age of 11 and at the same time that of the accordion. Later he also studied clarinet achieving excellent results and also being part of the Band of the Municipality of Fiumedinisi. He has been part of small folk music groups for a few years with which he has also toured in France and Russia. In 2006, the turning point at an artistic-musical level with the meeting with maestro Renzo Tomassetti from Spoleto, who has been managing one of the largest accordion schools associated with the C.D.M.I. for over thirty years. He has participated in masterclasses on jazz music with Luciano Biondini, Vince Abbracciante, Gabriele Mirabassi, Massimo Tagliata, Klaus Paier, Goran Alachki, Richard Galliano, Vincent Segal. He was called to replace the great Frank Marocco (who later became his teacher) on the occasion of the great Fisarmoniche in Crociera event and participated in a television program broadcast on Rai International entirely dedicated to the accordion and to the famous Victoria accordion company, for which he was a demonstrator at the Frankfurt Musikmesse 2011, 2012 and 2013. He participated in the Adamo Volpi Music Review in which he played two songs that will be part of the monographic disc dedicated to this artist. He earned a first level degree in classical accordion at the Higher Institute of Musical Studies in Ancona under the guidance of prof. Alessandro Mugnoz, and of II level at the conservatory of Fermo under the guidance of Professor Riccardo Centazzo. He has played concerts in Germany, United States, Canada, Holland, Slovakia, France, Israel, England, Poland, South Korea, Cambodia, Thailand, China, Chile, South Africa, Bahrain, Switzerland, Romania, Greece, Bulgaria, Slovenia, Croatia , Luxembourg, Czech Republic, Serbia, Portugal, Cyprus and has played with musicians such as Vince Abbracciante, Roberto Gervasi, Luca Pecchia, Gabriele Pesaresi, Roberto Gazzani, Giacomo Medici, Piero Principi, Paolo Principi, Paolo Sorci, Ludovico Carmenati, Massimo Manzi, Javier Girotto, Franco Cerri, Giacomo Uncini, Ana and Carlos Maza, Naile Sosa, Luca Ciarla, Maurizio Perrone, Francesco Savoretti, Maurizio Moscatelli, Ernesto Nobili, Cristiano Dalla Monica, Francesco Di Bella, Alfonso Bruno, Serena Spredicato, Giorgio Vendola, Nando Di Modugno and many others. He participated, together with great names in the accordion such as Richard Galliano, Massimo Tagliata, Mirco Patarini, in the filming of the documentary La Fisarmonica produced and distributed by Sky Arte throughout Italy and beyond. He is currently a teacher of Accordion and Jazz Accordion at the Paolo Soprani Civic School in Castelfidardo and on 14 May 2017, the day of the Patrons San Vittore and Corona, he received the honor of First Ambassador of the Accordion and of Castelfidardo. He was a member of the jury at the 2018 edition of the International Accordion Award of Castelfidardo and of the first edition of the Lariano International Belly Gathering (2019). He currently holds the position of vice-president of the Gervasio Marcosignori Association of Castelfidardo, where he plays an important role in the Accordion in Time project together with important accordionists such as Mirco Patarini, Valentino Lorenzetti, Giuliano Cameli, with whom he is currently engaged in a production theatrical with the prestigious Compagnia della Rancia of the famous director Saverio Marconi. He has several record productions to his credit, both as a leader (Walkin 'on my way - 2014; Radici - 2018) and as a sideman (Carlos Maza, Todo es Relativo - 2017).